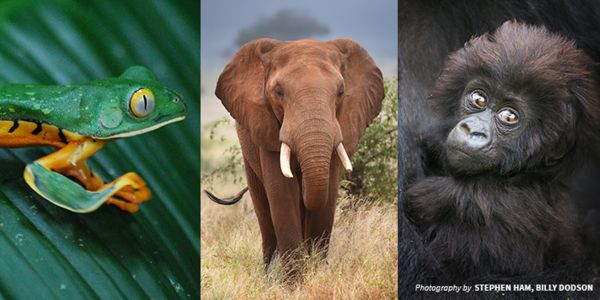 Tell the U.S. Congress: Biodiversity is for all of us!

Conserving biodiversity is not a luxury – it is a necessity. Human communities count on the social, economic, and ecological benefits of varied species every single day, in ways that are easy to perceive if you know what to look for.

In communities around the world, and especially in Africa, development and economic growth are inevitable. Sustainability is not only compatible with economic growth – it's required for optimized growth in the long run. By overpressuring our natural resources, we risk destroying the most foundational asset that humanity needs to thrive.

Nature is a fundamental driver of all economic activity and human wellbeing. Wildlife directly create economic value in industries like tourism and agriculture. They keep the ecosystems humans depend on for food and water security in balance. COVID-19 has shown us all the danger of zoonoses, or diseases transmitted from animals to humans, which increase in risk when unhealthy human-wildlife contact takes place.

AWF and Care2 are partnering together to drive support for legislation that aims to conserve biodiversity. Here are three species conservation bills you can write to Congress in support of today:

This bill funds conservation for amphibians around the world, 70% of which are either threatened by extinction or declining due to threats like disease, climate change, habitat loss, and the pet trade.

Primates are especially threatened by habitat loss – 90% of great ape ranges in Africa are projected to be lost by 2050. Compounded by human killings, disease, and the pet trade, an estimated 60% of the world's primates are threatened by extinction. This bill will ban private ownership and interstate commerce of primates including monkeys and apes.

Protecting these threatened species is a key factor in maintaining human well-being. Sign the letter below to urge your congressman to back these essential bills.

I'm writing in support of three critical pieces of legislation that help threatened species survive and humans thrive. We live in a time when biodiversity is more threatened than it has ever been in human history – yet all humans' livelihoods, cultures, and health depend on conserving our natural resources and keeping our ecosystems in balance.

The planet's natural resources are irreplaceable. According to the Organisation for Economic Co-operation and Development, economic benefits from biodiversity such as crop pollination, water purification, flood protection, and carbon sequestration are worth an estimated $125-140 trillion per year, more than the world's GDP. Safeguarding biodiversity now means preventing famines, pandemics, and recessions tomorrow.

We do not have to choose between sustainability and economic growth. The choice is already made for us by all the available evidence we have: our global economy depends on nature. The two go hand-in-hand.

That's why I'm urging you to support the following bills which protect threatened species:

Amphibians prey on disease-spreading insects and produce chemical compounds that can treat human diseases like cancer, both directly supporting human health. This bill aims to assist in conserving highly endangered amphibian species around the world, 70% of which are in decline or face a risk of extinction.

The planet is currently approaching its sixth mass extinction event. This bill establishes the Critically Endangered Animals Conservation Fund, authorizes funding through 2027, and targets the conservation of endangered and critically endangered species.

Primates in captivity are too frequently mistreated, and mishandling of the creatures can spread deadly zoonotic pathogens to humans. Furthermore, an estimated 60% of the world's primates are threatened by extinction. This bill will ban private ownership and interstate commerce of primates including monkeys and apes.

Biodiversity is a bipartisan issue because we all can recognize the value of conserving threatened species and lands. The world is counting on you to support this legislation.

Care2
Tell the U.S. Congress: Biodiversity is for all of us!
SHARETWEET