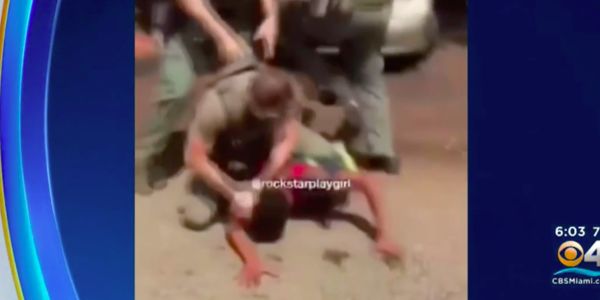 Officer Krickovich Slammed a 15-Year-Old Boy's Face into the Ground Repeatedly and It Was All Caught on Tape.

Is it surprising that we aren't surprised?

It's happened again. A black body abused by an officer of the law. Someone who is charged with protecting all American citizens but who seems to forget their mandate when they come into contact with those of a darker complexion.

This time it happened on the streets of Tamarac, Florida. Police had been called to respond to a possible fight between teens at a local shopping center. When they arrived they found a large group of students gathered around eager to watch what might transpire. Officers arrived to break up the fight and send the kids on their way. But when it comes to American law enforcement's interaction with the public, something simple often turns into something more and that's what happened here.

While being arrested by an officer, a teen's cell phone fell to the pavement. At this time, a young 15-year-old boy who's been identified as Lucca, leaned down to pick up the phone. It was at this point that a bystander began to film. What the video shows is shocking.

The arresting officer, Sgt. Greg Lacerra pushes Lucca in the head as he stands up. The boy then turns sideways and appears to respond to Lacerra at which point Lacerra pepper sprays him in the face and throws him to the ground. Then, his partner, deputy Christopher Krickovich joins in. He jumped on the young boy and slammed his face into the concrete while pummeling him with punches. To add insult to a quite literal injury, Lucca was then arrested and charged with assault, resisting arrest, and trespassing.

Krickovich says he reacted this way because he feared for his safety, but the teen was unarmed and through watching the video, no reasonable person could justify his behavior. He has currently been placed on leave pending an investigation.

But if past is prologue it is quite likely that nothing will happen to this disgrace of an officer and law enforcement will throw the book at Lucca.

That cannot be how this story plays out. Please stand up and demand justice for Lucca and accountability for officer Krickovich's actions. Sign the petition and demand that Lucca's charges are dropped and that Krickovich is sent packing.
Sign Petition
SHAREShare this petition with friends!TWEETEMAILEMBED
Sign Petition
See more petitions:
You have JavaScript disabled. Without it, our site might not function properly.

Care2
Officer Krickovich Slammed a 15-Year-Old Boy's Face into the Ground Repeatedly and It Was All Caught on Tape.
SHARETWEET