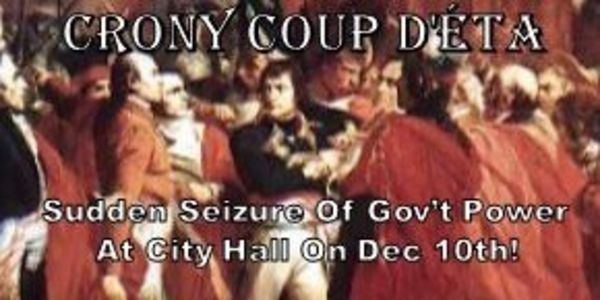 Upland Residents Asking Our New City Council, To Appoint Glenn Bozar To The Vacancy ~ (If Having Trouble Signing, Please Switch To Google Chrome)

(If Having Trouble Signing, Please Switch To Google Chrome)

Please visit TheUplandReport.com for updates & more information. On November 6th, we the residents of Upland elected three reformers to our city council, to represent us and clean up the cronyism and corruption in the City of Upland. The outgoing council has done everything in their power since the election, to block and stop the reformers from succeeding. This includes preventing the incoming council from being able to advertise the Upland City Manager Position that exists, since Bill Manis vacated the position on November 1st.

To do this, the corrupt outgoing city council in at their very last meeting on 11/26/18 before surrendering 3 seats + 1 new vacancy to the new city council, are presenting a contract to Jeanette Vagnozzi (who is seen as the embodiment of the cronyism and corruption) and are crowning Vagnozzi as our permanent Upland City Manager. Despite the fact that 3 of the 4 Council Members giving this job title to Vagnozzi on November 26th, are exiting their council seats on 12/10/18 and the 4th member, at best will only remain on council for the next 2 more years, unless she isn't recalled first.

Therefore, to solidify our new city council majority being Janice Elliott, Rudy Zuniga and Ricky Felix who we elected on November 6th and to prevent the Debbie Stone Regime to waste $100,000 on a Citywide Special Election so that the cronies who just lost every race, can run again to try to get back on city council, we are respectfully asking our new City Council Members, vote unanimously together to appoint Glenn Bozar on December 10th, 2018.

As you know, Glenn Bozar served honorable on the Upland City Council from 2012 to 2016. Glenn Bozar is a known fiscal conservative, who has always fought for the residents of Upland and wants nothing from the establishment, but a course correction. Glenn Bozar needs no special governmental procedural training and Bozar can hit the ground running one day. As Upland residents, we believe it is absolutely critical that a very strong appointment be made that is totally incorruptible. We also realize that Glenn Bozar resides in the only unpresented district in Upland being District 1. If appointed, Bozar's presence on council as a resident of District 1, would provide equal representation in all 4 Districts, instead of the chronic UNEQUAL representation in all 4 Districts, which is what we have now.

In addition, both times Glenn Bozar ran for City Council in 2012 and again for Mayor in 2016, we can see from the SB County Registrar of Voters, how many votes Bozar obtained in all of the precincts that now make up District 1 and these numbers prove, that he is the ideal choice to allow the over 18,000 residents residing there, to feel that they will be soundly represented until November 2020, at which time they will finally be able to elect their own representative.

We are confident that Glenn Bozar cannot be enticed by the cronyism with a Mayor Pro Tem Title, nor all the paid committee assignments in the world. As the residents of Upland, we know Glenn Bozar's loyalties lay with the taxpayers and residents of Upland. We have Glenn Bozar's prior four year voting record to see how he will perform if appointed to Upland City Council. We trust Glenn Bozar implicitly and we know Glenn a moral man, of good character. Therefore, we the citizens of Upland, California who put each of you into office on November 6th, ask that all of you, vote together to give the people of Upland, this appointment to solidify the voting majority that all of the residents worked so hard to achieve on November 6th. Thank you for your consideration to our deep desire and we respectfully remind each of you, that we put you there, to represent us.