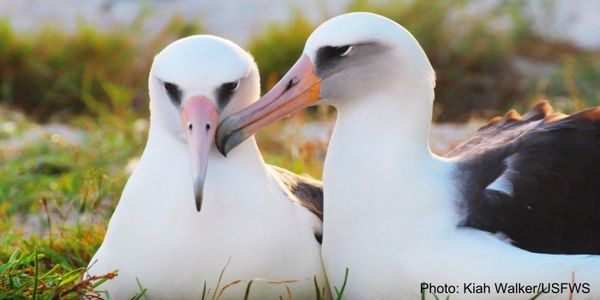 Albatrosses and Petrels Need Your Help

Albatrosses and petrels are some of the most endangered birds on the planet. These species spend most of their lives on the open ocean, but too often die tragic deaths after becoming hooked on fishing lines and drowning. To ensure the survival of these magnificent birds, we need international cooperation.

The Agreement on the Conservation of Albatrosses and Petrels coordinates and advances protections for these birds, but the United States has yet to sign on. Now, legislation has been introduced that would enable the U.S. to join this treaty.

Urge your Members of Congress to stand up for albatrosses and petrels!

NOTE: Your signature will become part of the official public record.

As your constituent, I am writing to ask that you please support the Agreement on the Conservation of Albatrosses and Petrels to advance international cooperation to protect some of the most legendary and endangered birds on the planet. In the House, the Albatross and Petrel Conservation Act (HR 1305) has been introduced to implement this agreement.

Of the 22 species of albatrosses, 15 are threatened with extinction, along with half of all petrel species. These magnificent birds, with ranges extending across entire oceans, often die tragic deaths out at sea after becoming hooked on fishing lines and drowning. An estimated 100,000 albatrosses die every year in this manner, or one every five minutes. They also face the growing problem of plastic in our oceans. A recent study estimated that 90 percent of seabirds are ingesting plastic. To ensure the survival of these global species, we need international cooperation.

The Agreement on the Conservation of Albatrosses and Petrels (ACAP) coordinates international activity to protect these species. Joining the agreement has had bipartisan support, including from President George W. Bush and President Obama, but the U.S. has yet to sign on. The agreement would allow the U.S. to leverage its expertise, as our fisheries have been global leaders in adopting effective, low-cost solutions that have dramatically reduced avian mortality from longline fishing. Passing this legislation and ratifying the agreement will help bring other nations on board to implement these common-sense measures. At the same time, as these strategies gain a foothold, it will help level the playing field between U.S. fisheries and foreign fisheries.

Please support the Agreement on the Conservation of Albatrosses and Petrels and HR 1305 in the U.S. House to help save these storied species.