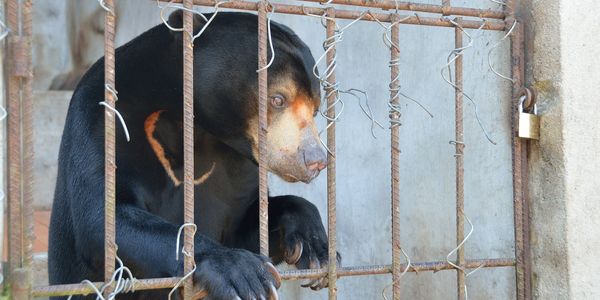 Paddington the Bear Was Saved From A Cruel Bile Farm. We Must Send All Remaining Bears on Bile Farms to Sanctuaries!

In an amazing victory, a sweet, jam-loving bear named Paddington was rescued from the tragic conditions of a bile farm in Vietnam by the heroes at Animals Asia and sent to the safety of a sanctuary in Tam Dao. But hundreds of bears are still languishing on these farms throughout the country -- and it is time they all get to enjoy the same freedom that Paddington has found!

Sign now to demand the Vietnamese Government frees the remaining bears that still languish on bile farms and send them to sanctuaries!

It is unsurprising that an industry promoting the consumption of an animal's digestive fluid has a history of abuse and mistreatment. Bears like Paddington are confined to tiny cages and then forced to endure one of many horrific extraction techniques. Sometimes this means using catheters to "milk" bile, other times, this means literally creating holes in a bear's gall bladder to extract the bile that way. All of these techniques are vile, abusive, and subject innocent animals to cruel and unusual suffering.

That's why it's so heartwarming that Paddington was not only saved, but seems to be thriving! She will still have to receive medical treatment after some of the horrors she endured, but it is clear that Paddington is full of personality and happy to be safe at a sanctuary where she can live and thrive the way nature intended.

But not all bears get to share Paddington's fate. The 2005 decision by the Vietnamese government to make the wild capture and bile extraction of bears illegal was a huge victory for animal rights and freedom. But the plan is to eradicate the industry by 2035, which means many of the estimated ~300 bears currently held on these awful farms will never experience freedom or safety in a sanctuary. It's time the government expedites the salvation of all farmed bile bears so that more sweet animals like Paddington can live out their remaining years away from the tragic exploitation of bile farms.

Paddington is one of the lucky bears who made it out and gets to live out her remaining years in peace. She must be an example for other bears that still need to be rescued! It's time the Vietnamese government expedite the freeing of all remaining farmed bears and send them to sanctuaries! Sign the petition now if you agree!
Sign Petition
SHAREShare With FriendsTWEETEMAILEMBED
Sign Petition
See more petitions:
You have JavaScript disabled. Without it, our site might not function properly.

Care2
Paddington the Bear Was Saved From A Cruel Bile Farm. We Must Send All Remaining Bears on Bile Farms to Sanctuaries!
SHARETWEET