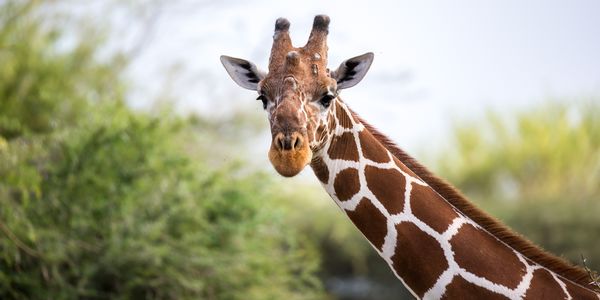 These Gentle Giants Are Killed and Turned Into Trinkets for the Rich. Sign to Ban the Sale of Giraffe Products.

Many people are unaware that the giraffe is in danger. According to a 2016 survey, there are fewer than 100,000 of them in the wild. In fact, there are more elephants on earth than giraffes. In just one generation, almost 40% of the species has been lost. Their slow disappearance has been called the " silent extinction."

But you can help! Sign to stop the sale of endangered giraffe products in the U.S.

Giraffes are in this dire situation because of two main reasons: human encroachment into their habitat and poaching. Construction and other industries have pushed the giraffe off their prime grazing lands, and locals in some areas rely on giraffe meat for food or sell it for profit.

Perhaps the most insidious reason for their demise is trophy hunting, where rich westerners pay thousands of dollars for the chance to fly to Africa and drop a giraffe with a high-powered rifle.

After they kill the poor giraffe, they usually pose by its corpse and then chop it up, and ship some of its body parts back as trinkets. In fact, according to the Humane Society, over the last decade, more than 4,000 giraffe trophies have been imported into the US. Their body parts are turned into jackets, boots, pillows, and knife handles and are sold online for hundreds of thousands of dollars.

If the officials continue to allow giraffes to be hunted, imported into the US, and sold, the species faces an all but certain fate. That's why it is so important that New York has just become the first state in the nation to ban the sale of giraffe products. The new law protects several other endangered animals as well, including hippos and pangolins.

It's time other states follow in New York's footprints and create state bans that prohibit the sale of products made from giraffes and other vulnerable species. America is fueling this market, and so our government must step up to stop it.

Tell your state government that you want a ban on giraffe products in your state. Sign the petition to be a part of the solution, then make sure you contact your representative.
Sign Petition
SHAREShare With FriendsTWEETEMAILEMBED
Sign Petition
See more petitions:
You have JavaScript disabled. Without it, our site might not function properly.

Care2
These Gentle Giants Are Killed and Turned Into Trinkets for the Rich. Sign to Ban the Sale of Giraffe Products.
SHARETWEET