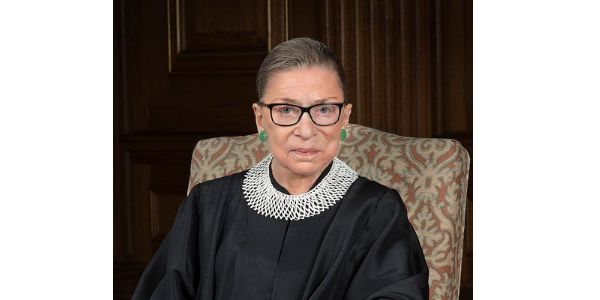 *UPDATE* This comes as not suprise -- Trump has not wasted any time in picking a Supreme Court nomination that aligns with his goals of stealing as much of our freedom as possible. If his choice, staunch conservative Amy Coney Barrett, is confirmed to the Supreme Court, she will use her lifelong term to destroy reproductive rights, snatch away affordable healthcare from the vulnerable, loosen restrictions on the ways campaigns are financed, and so much more. She, nor any other Trump nominee, should be confirmed until after the inauguration of Joe Biden. Keep signing and sharing the petition!

Tragically, U.S. Supreme Court Justice Ruth Bader Ginsburg passed away on September 18th, 2020. The "notorious RBG," as fans had deemed her, was one of the few liberal justices on a court that Trump has now stacked in a way that threatens American human rights of all kinds. She was a bulwark protecting gender equality, justice, and voting rights.

No doubt Trump will attempt to push through a new nominee for the Supreme Court of the United States (SCOTUS) before the election. Some of the horrifying names that he has already floated are Senators Tom Cotton and Ted Cruz — men who have argued that peaceful protesters should be met with military force and fought against common-sense gun safety regulations. He's also proposed Kentucky Attorney General Daniel Cameron, a racist who refused to bring charges against Breonna Taylor's murderers. This should scare us all.

But the Senate can stop this. They can delay confirming a nominee until after the election and inauguration of Joe Biden in January. We must insist they do this.

In fact, even Republicans should be understanding of this approach — seeing as they did the exact same thing when they refused to vote or even hold hearings on Obama SCOTUS nominee Merrick Garland for a full ten months before he left office. At the time, Senate Majority Leader Mitch McConnell claimed his stonewalling was justified because he supposedly believed Supreme Court vacancies should never be filled during an election year; that only a freshly-elected president should be allowed to have that power. According to him, in an election year, "The American people should have a voice in the selection of their next Supreme Court justice."

And at this point, we are only six weeks out from the next presidential election — one of the most consequential elections in modern U.S.history.

Before she died, Ruth Bader Ginsburg told her granddaughter to share this statement with the world: "My most fervent wish is that I will not be replaced until a new president is installed." We must grant RBG her final dying wish.

Help us honor Justice Ginsberg and all she stood for. Please sign the petition to tell Congress you absolutely will not accept another Trump Supreme Court justice!
Sign Petition
SHAREShare this petition with friends!TWEETEMAILEMBED
Sign Petition
See more petitions:
You have JavaScript disabled. Without it, our site might not function properly.