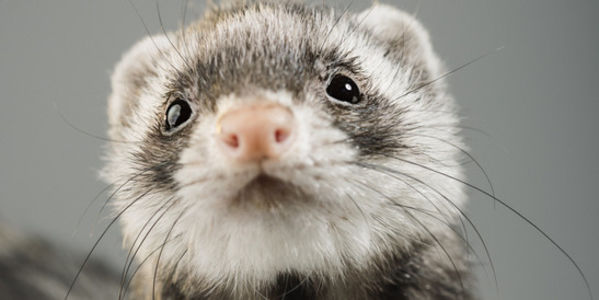 The ferrets that don't make it to pet stores are sold off for scientific experimentation, or killed as gruesomely as possible.

They have been dying on a daily basis.

That's the explosive new conclusion from a new report, first issued by PETA and later confirmed by the U.S. government's Department of Agriculture, about horrific breeding facilities in Pennsylvania.

Unlike many others, this breeding mill wasn't used to pump out pups and kittens as though they were mass-manufactured plastic dolls. Instead, Triple F Farms, Inc. was the site of hellish ferret-breeding, used to provide pet stores and research laboratories with an endless supply of soft little furry ferrets. To be bought and sold as both pets, and "rats."

Sign the petition to demand that the U.S. government immediately shut down the abusive and murderous Triple F Farms ferret breeding operation!

Triple F Farms is not just a huge breeding mill for ferret "production" — it basically has a monopoly on ferret breeding in the U.S. That means that it is basically impossible to ethically purchase a ferret in the country. While the factory farm claims that "[o]ur babies are very special to us," undercover investigations reveal a very different story. Not only do the ferrets there die every day, but those that do live encounter a life full of trauma. Inbred animals are sold off for scientific experimentation and all the horrors that entails. The "healthy" ones become humans pets — but none are truly healthy or unscarred.

More than six thousands ferrets are stuffed into over-packed barns where the concrete-and-wire floors are covered in fecal matter and decay. Animals were deprived of necessary veterinary attention, despite widespread injuries and illnesses — including open wounds, eyes that were literally bleeding and ruptured, rectal prolapses, and herniated organs. Food and water were so scarce, many ferrets perished from dehydration and starvation.

Crying out in distress, these animals passed away in the same building, sometimes right beside, their mama ferrets and litter-mates. When they didn't slowly pass away from infections and malnutrition, workers ran them over and ultimately killed them using carts.

This is too heartbreaking to ignore. We must take action now. No amount of people wanting fuzzy cuddly pets is worth putting animals through this kind of misery. This whole business of factory farming and mass-breeding ferrets must end now!

Urge the U.S. Department of Agriculture to shut down Triple F Farms and end this nightmare of ferret breeding once and for all!
Sign Petition
SHAREShare this petition with friends!TWEETEMAILEMBED
Sign Petition
See more petitions:
You have JavaScript disabled. Without it, our site might not function properly.

Care2
The ferrets that don't make it to pet stores are sold off for scientific experimentation, or killed as gruesomely as possible.
SHARETWEET