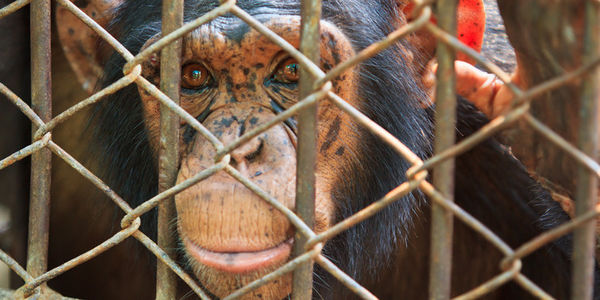 They tortured these chimpanzees for decades. Now, the animals are still locked in the same nightmarish facilities

When she was only one year old, Montessa the chimpanzee — one of our closest genetic cousins — was bought and sold. Her purchaser was a U.S. government laboratory specializing in experimental research. And she's been there for 45 years.

This creature — an intelligent, wise, emotionally aware being — is the kind of captive lab animal that constitutes most people's worst nightmare. She's also not the only one. The facilities where she has been held under lock and key, and subsequently subjected to untold numbers of experiments, have been "home" to countless other research chimps.

Finally, five years ago, after 40 years of this torture, Montessa and her fellow chimpanzees seemed to finally be free after the U.S. National Institutes of Health (NIH) ceased its biomedical experiments on these animals. All chimps owned by the federal government were to be sent to a special sanctuary in Louisiana, where they could peacefully live out the rest of their scarred and traumatized days. Except Montessa.

Sign the petition to demand that the U.S. government finally send these abused, traumatized lab chimps to a reputable sanctuary!

Montessa and 38 of her fellow lab chimpanzees were deemed "too frail" to move from the research facility in New Mexico where they've been locked for years, to the sanctuary in Louisiana. Even though they're no longer actively being experimented upon, they cannot escape the nightmarish place where these unspeakable things happened to them. Every day, they must relive the pain as they see the same walls, the same people, the same everything.

Even worse, after all those years of needles and pain and prodding, some animals have been considered too sick to continue living. And those chimps, evaluated with a very loose and low set of standards, have been euthanized. Many medical experts argue that some of those animals might very well have healed and recovered.

Animal welfare organizations as well as members of Congress have all been appropriately outraged by this corruption and continued cruelty. Despite their outcry, the NIH has refused to reconsider their policy. As the New York Times reports: "In short, the chimps now at Alamogordo will die at Alamogordo."

The public has no way of knowing the full range of horrors that Montessa endured. All such information has been kept strictly under wraps. Most of what we know is that she has given birth to chimp babies on four occasions. She has been pregnant five. We can't control disturbing things that happened to Montessa in her past. But we can control her future. We can force the government to see that they must finally do right by the animals they intentionally and sadistically tormented for decades.

Sign the petition urging the National Institutes of Health to finally give its retired research chimpanzees the care they deserve by sending them to a reputable sanctuary where they can heal in peace!
Sign Petition
SHAREShare this petition with friends!TWEETEMAILEMBED
Sign Petition
See more petitions:
You have JavaScript disabled. Without it, our site might not function properly.

Care2
They tortured these chimpanzees for decades. Now, the animals are still locked in the same nightmarish facilities
SHARETWEET