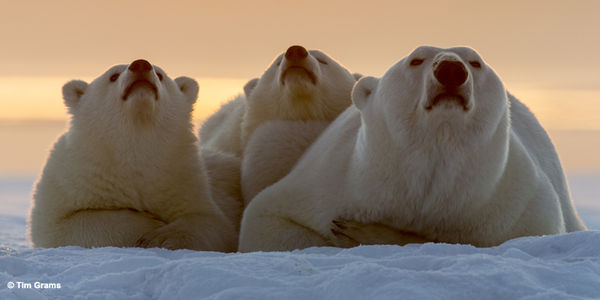 Until recently, most populations of polar bears were considered healthy, even growing. But in recent years, climate change has begun to take a serious toll on these impressive animals. To make matters worse, there’s another threat lurking in the waters around polar bear habitat: Oil.

Polar bears spend much of their time on Arctic sea ice, sometimes hundreds of miles from land. Surrounded by water, they share this region with ever-increasing vessel traffic. Ships and tankers of all kinds make their way through the Bering Strait (home to a wide variety of marine species) and around the Arctic, holding millions of gallons of fuel between them. Most of these ships use something called heavy fuel oil — a specific type of oil that produces more harmful emissions, would be nearly impossible to clean up in the Arctic environment, and is carried in such large quantities that a leak or spill could be catastrophic. This type of fuel has already been banned in Antarctic waters.

The remote Arctic, with its dramatic and unpredictable weather, is no place for this kind of fuel. It makes each ship a possible environmental disaster, with the potential to harm or even kill polar bears and other wildlife throughout the region. And there are safer alternatives — distillate fuels and natural gases that don’t carry the same potential risks.

Vessel traffic through the Arctic will only increase as a warming climate means less and less sea ice. This is a threat we must address now. Ask officials to place a ban on heavy fuel oil use in the Arctic, and reduce this threat to a pristine environment and the polar bears and other wildlife that depend on it.

As a wildlife advocate and voice for endangered species, I want to draw your attention to a serious problem in the Arctic that threatens polar bears, as well as all other wildlife in the region.

As Arctic ice continues to recede due to climate change, shipping in the Arctic is only increasing, with billions of tons of cargo moving through the region every year.  The International Maritime Organization's (IMO) Polar Code, while addressing some environmental concerns, does not account for the immense threat to the Arctic's wildlife posed by shipping and heavy fuel oil (HFO).

The Arctic's dramatic and unpredictable weather and changing sea ice conditions make vessel transits of any sort a serious risk. The Arctic Council's Arctic Marine Shipping Assessment stated that: "The most significant threat from ships to the Arctic marine environment is the release of oil through accidental or illegal discharge."  A spill of any kind in the Arctic should be avoided at all costs. But with the added danger of HFO on board, every ship in the region becomes a potential environmental disaster.

This type of oil, markedly more harmful to the environment than distillate marine fuel, has already been banned in Antarctic waters. The black carbon created by burning heavy fuel oils is well documented to hasten the already warming climate in the region. As you are aware, the Arctic Council has already created a task force directed to find ways of reducing black carbon emissions in the Arctic. HFO is also more difficult to clean up than distillate fuel, even in ideal environments, because it sinks below the water's surface. And it has proven to persist in the water for weeks after a spill. Yet countless ships both burn and carry this fuel through the Arctic every year, even with reasonable alternatives readily available, such as distillate fuels and liquefied natural gas.

Permitting of non-ice-class ships must also be addressed. With the risks involved in sailing the Arctic, no matter the type of fuel on board, it is a threat to human safety and the environment to allow any non-ice-class ships to traverse the Arctic. I am concerned that the language currently in the Polar Code still permits many ships not built for Arctic conditions to travel through the region, raising the risk of a dangerous accident, as well as that of a fuel spill.

I ask you to urge the IMO to ban heavy fuel oil use for shipping in or near Arctic waters, and include this provision in the Polar Code. I further ask that you include specific guidelines in the Polar Code to prevent non-ice-class ships from traveling Arctic waters. We must reduce the risk of an oil spill in this region, the consequences of which could be devastating to its people, landscape and wildlife.