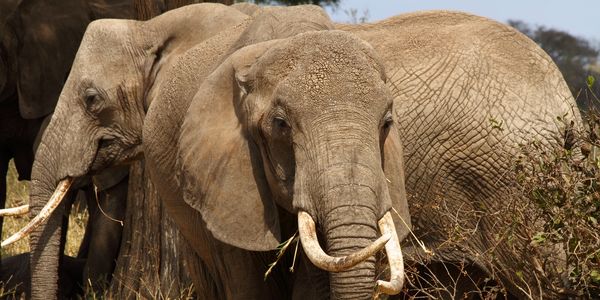 We say "leaked" because the NRA doesn't want you to see it. And once you've watched it or read a description, it isn't hard to tell why.

No one would be traveling abroad to murder innocent elephants if they weren't allowed to bring back body parts to the U.S. as grotesque "trophies." Sign the petition and demand the United States Fish and Wildlife Service (USFWS) completely ban the import of elephant trophies!

In the video, Wayne LaPierre and his wife Susan are on a hunt in Botswana, led by guides who track the elephants for their paying guests, who are just there to do the brutal killing. But Wayne LaPierre was clumsy and cruel, botching every single one of his shots -- even those at point-blank range -- and turning the killing into straight up torture. In the video, the poor elephant can be heard gasping for breath as LaPierre stands over it and fires bullet after bullet into its head. Finally, even the guides get fed up, and step in to finish the murder quickly.

We're sorry to say that's not the end of the cruelty. The video continues and shows Susan LaPierre killing yet another endangered savanna elephant, an act she finishes up by slicing off the majestic creature's tail and yelling "Victory!"

The NRA, with Wayne LaPierre at the helm, loves to claim that hunting and conservation go hand in hand. But what if that hunting is straight up torture by inexperienced, prideful sadists who track down members of endangered species like the savanna elephant? All that Wayne and Susan LaPierre did that day was inflict unnecessary suffering on innocent creatures, and make their species more endangered in the process. That's far from conservation.

The LaPierres' trip and killing spree took place mere months after the Sandy Hook school shooting -- in response to which he made statements about how the media was to blame for glorifying killing. The irony is revolting.

Sign the petition and demand that the USFWS actually take the side of conservation, and not of pro-gun, pro-killing, pro-torture, anti-animal lobbyists at the NRA. They must ban all elephant trophy imports to the United States!