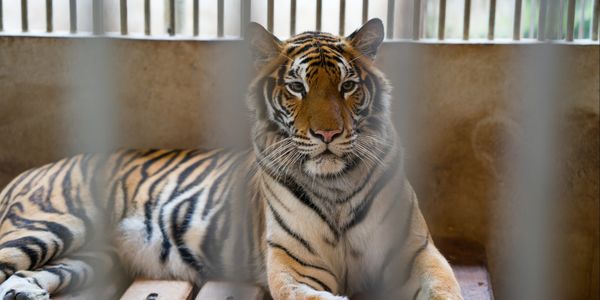 When Will Thailand Ban the Cruel Captive Tiger Industry? More Than 2,000 Tigers Suffer There Daily.

In 2016, the Thai government raided the notorious Tiger Temple. For years, mischievous monks had been advertising their tiger sanctuary as a place where man and beast lived in peace. Hundreds of thousands of tourists passed through their gates and paid a pretty penny for the chance to get an up-close and personal with tiger cubs. What they didn't know was that behind the scenes the tranquil park was an actual terror.

When the Department of National Parks finally arrived, they found nearly 150 tigers and a veritable treasure trove of tiger products destined for the black market. According to the New York Times: officials seized "1,600 tiger parts, including pelts, amulets fashioned from skins, scores of teeth, 40 dead cubs found in a freezer and 20 more preserved in jars."

The Tiger Temple raid was greeted with excitement by animal rights activists who hoped that it was the beginning of a countrywide crackdown on the captive tiger industry. But since the raid, things have only gotten worse for the tigers of Thailand.

In the three years since the Tiger Temple was raided, more than half the tigers rescued by the government have died. Additionally, tiger parks haven't begun to disappear. Rather, they have been steadily on the rise and now number nearly 70 with a total number of 2,000 animals in their "care."

These facilities make money both from "paw over tail." Unwitting travelers pay big bucks to feed and pet the cubs. Then when they are grown they are slaughtered for their parts and sold into the black market.

Thailand initially raided the unlicensed Tiger Temple partly to show that they took animal welfare seriously. The world watched as the 147 tigers were "saved." But since that time, the country has dropped the ball. Neither animal welfare nor public outcry has worked to urge them to end tiger parks and farms within their borders.

This is unacceptable. We must fight to end tiger parks and farms in Thailand. It is time for Bangkok to listen to the millions of people who are roaring mad about the treatment of the thousands of animals that reside in these horrible institutions.

Please add your name to the fight. Sign the petition and demand that Thailand ban tiger captivity and ensure that those currently in captivity find refuge in a reputable sanctuary.
Sign Petition
SHAREShare this petition with friends!TWEETEMAILEMBED
Sign Petition
See more petitions:
You have JavaScript disabled. Without it, our site might not function properly.