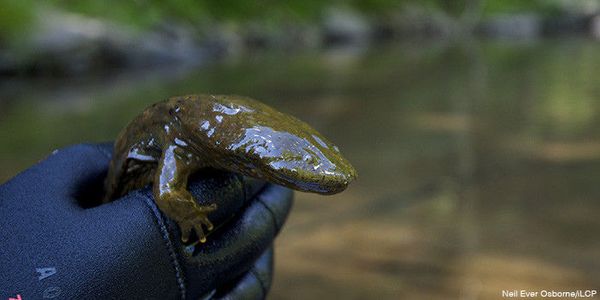 Roughly 19,000 miles of Keystone State rivers and streams are polluted, and, as a result, the largest salamander in North America is quickly vanishing from the region. Now, students in CBF's Student Leadership Council are drawing attention to the hellbender's plight by working to designate the salamander as Pennsylvania's official state amphibian.

After studying hellbenders and meeting with legislators, the student-written Senate Bill 658 has passed the State Senate. But the State House needs to pass the bill as well. Join the ranks of hellbender defenders by urging your representative to support the hellbender bill.

The students' work to recognize this vanishing critter and highlight the fight for clean water is inspiring. But the job is only half done.

The largest salamander in North America is quickly vanishing from its primary habitat in Pennsylvania.

A group of student leaders hopes you will help change that.

As advocates for the hellbender's survival, these students are learning how legislation is created and how Pennsylvania's political process works—they know they can play a role in shaping their own futures and restoring the health of their local rivers and streams. These young leaders have done their due diligence to highlight the critter's place in the continued fight for clean water.

But the job is only half done. The hellbender bill was passed by the Senate, but it needs your support in the State House.

The hellbender effort has gained national attention, making it onto the front page of the Wall Street Journal and as subject of the iconic Mark Trail Sunday comic strip. But attention isn't enough. The students are asking that a vanishing animal be recognized and given an opportunity to rebound. The students and the hellbender deserve an answer.

I urge you to support Senate Bill 658 and vote to designate the Eastern hellbender as Pennsylvania's official state amphibian.
Sign Petition
SHAREShare With FriendsTWEETEMAILEMBED
Sign Petition
See more petitions:
You have JavaScript disabled. Without it, our site might not function properly.