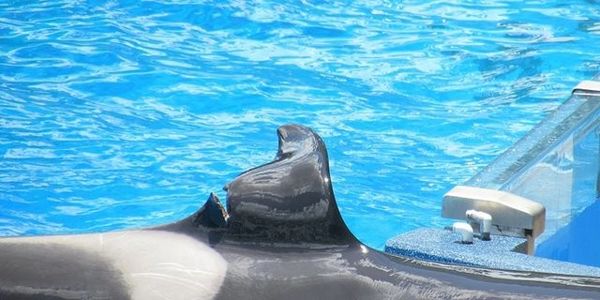 Katina the Orca's Fin Looks as if It Is About to Fall Off, Yet SeaWorld Forces Her to Perform Everyday

In April, one of SeaWorld's several killer whales was spotted with a horrific injury to her dorsal fin and according to recent photos, she still hasn't gotten the veterinary care she needs to help her heal.

According to SeaWorld, they have no idea how Katina got a deep gash on her fin that seems to be several inches deep. It looks as if it could tear off at any moment.

Initially, SeaWorld waited two weeks before alerting the public that Katina was even injured and then denied that they knew how it happened, even though the park has cameras everywhere.

The park then suggested that the injury was due to normal interactions with other orcas — something that marine mammal scientists refute.

Regardless of how it happened, in Katina's current state, she needs to rest, not work. Unfortunately, SeaWorld has had her performing daily.

The poor captives of SeaWorld live an unhappy and dangerous life. Whales have been seen ripping the skin off of one another, biting each other and even demonstrating signs of severe stress.

Despite what they say, SeaWorld only cares about their bottom line, not the whales that help make them rich. These types of parks should no longer be allowed to keep marine mammals and force them to perform, it's cruel and wrong.

Please sign the petition and tell SeaWorld to end its orca program and give their current killer whales to a sanctuary.

Photo credit: Heather Murphy via Ocean Advocate News
Sign Petition
SHAREShare this petition with friends!TWEETEMAILEMBED
Sign Petition
See more petitions:
You have JavaScript disabled. Without it, our site might not function properly.

Care2
Katina the Orca's Fin Looks as if It Is About to Fall Off, Yet SeaWorld Forces Her to Perform Everyday
SHARETWEET