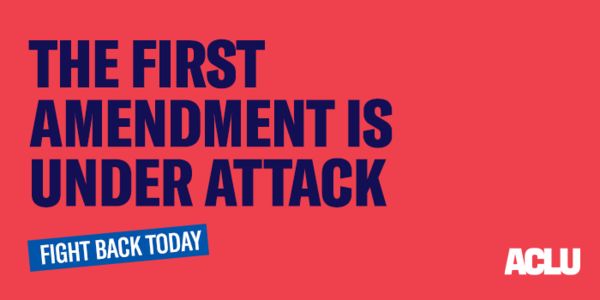 Protect the First Amendment with the ACLU

During Donald Trump's presidency, our country repeatedly suffered his administration's attacks on the First Amendment, including freedom of the press. Now, the Biden administration Department of Justice is quietly taking up the Trump mantle to fight free press, free speech, and government transparency in court.

The U.S. Freedom Press Tracker has documented the recent demise of press freedom, marking an unprecedented year of attacks on press in 2020 during the George Floyd uprisings across the country. This is why the ACLU, the ACLU of Oregon, and partner organizations are calling on Attorney General Merrick Garland to permanently adopt protections for journalists and legal observers at protests, and place restrictions on law enforcement's ability to interfere with journalists and legal observers covering protests. Sign our petition today to join our demand to protect the First Amendment.

Freedom of the press is part of the fabric of our democracy. It acts as both a check against government power and a tool for enabling the public to make informed decisions. This is why it's critical for journalists to have the protections they need to keep the public informed.

The Biden DOJ recently announced it will pursue prosecutions against January 6th rioters that attacked journalists. The DOJ is also simultaneously and paradoxically in court defending the ability of law enforcement to engage in the same conduct as January 6th rioters. This does nothing more than maintain the status quo of decades of harmful federal policing of protests rather than addressing the systemic problems laid bare last summer. Add your name to demand accountability today.

If the Trump era taught us anything, it was that protecting our most basic human rights requires tight reins on law enforcement, independent of the whims of leadership. We call on Attorney General Garland and the Biden administration to take responsibility for the violence of our federal agencies, review their policies, and rewrite them so that what happened last year to legal observers and press never happens again and the journalist and legal observers will, at a minimum, be able to do their jobs and publicly report on what happens when people march in the streets demanding change. We need advocates like you in the fight with us to ensure all of our voices are heard – are you in? Sign our petition today.

Care2
Protect the First Amendment with the ACLU
SHARETWEET