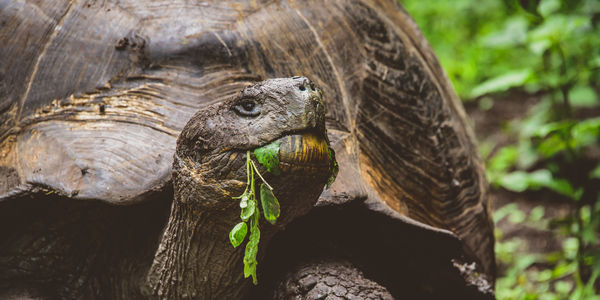 A Giant Tortoise Was Thought to Be Extinct. One Was Just Found Alive on the Galapagos Islands.

For more than a century, scientists have thought that a rare species of giant tortoise was extinct. The only known specimen of this species was discovered in 1906, and because another had never been found, researchers assumed the worst. But a lone tortoise was found on an Ecuadorian island, and just a few weeks ago lab results proved that the two specimens are related - meaning the species could live on and come back from presumed extinction after all!

Sign now to tell the Ecuadorian government to invest in research and conservation efforts to help recover this iconic turtle species!

Giant tortoises are fascinating creatures. These remarkable species, native to the Fernandina island, can weigh as much as 800 pounds. In the wild, their average lifespans are between 80 and 120 years, making them one of the longest-lived vertebrates in the world. They also tend to have mutualistic relationships with some subspecies of finch and mockingbirds found on the island, meaning they are an essential piece of the local ecosystem.

Tragically, all 14 different species of giant Galápagos tortoise are listed on the IUCN Red List as either vulnerable, endangered, critically endangered or extinct. And with the threats of climate change worsening every year - from changing temperatures to extreme weather events and altered habitats - these poor tortoises are facing an uphill battle.

The Galápagos Islands are crucial hotspots of biodiversity, and studying the conservation of this turtle will inevitably protect other species bound up in the area's ecosystem, too. We must tell the Ecuadorian government: invest funds into the research and conservation of this species of tortoise immediately! We have the opportunity to bring a species back from the brink of extinction, and we must act now!

Care2
A Giant Tortoise Was Thought to Be Extinct. One Was Just Found Alive on the Galapagos Islands.
SHARETWEET