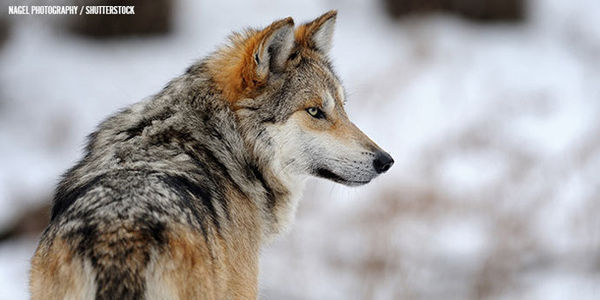 Save the Last Mexican Gray Wolves from Extinction

Right now, you can take a stand to save the last Mexican gray wolves from extinction.

Mexican gray wolves—the "lobo" of Southwestern lore— once numbered in the thousands throughout the southwestern United States and Mexico. But following a state-sponsored program of extermination, within a period of less than a few decades, the entire population almost vanished from the face of the earth. The mass eradication effort was so successful that all but a handful of lobos were killed, earning the subspecies a place on the list of threatened and endangered species. In a last-ditch effort to save this icon of the Southwest, the few lobo survivors were ultimately captured and placed into a captive breeding program. Today, all living Mexican gray wolves are descendants of just seven survivors of the lethal extermination program.

In the late 1990s, the U.S. Fish and Wildlife Service (FWS) reintroduced a small, captive-bred population of Mexican gray wolves back into eastern Arizona and western New Mexico. Decades later, this population of only about 100 members remains on the brink of extinction since the FWS has failed to produce and implement an effective plan for the lobo’s recovery as required by the Endangered Species Act. Instead, the FWS has repeatedly bowed to local political opposition to wolf recovery.

Following an Earthjustice lawsuit, the FWS recently released a draft Mexican wolf recovery plan. Unfortunately, the FWS has again catered to local wolf foes, icing out scientists from the process, producing a plan that will hinder recovery, if not lead the lobo to its eventual extinction in the wild.

Thank you for releasing a draft recovery plan for the Mexican gray wolf, an iconic species of the American Southwest. Unfortunately, scientific shortcomings in the draft plan will prevent the lobo's recovery. I urge you to revise the recovery plan so that it is based on the best available science.

Specifically, I urge you to fix the following flaws:

* The draft recovery plan calls for too few wolves over too small an area. The peer-reviewed, best available science says that additional Mexican wolf populations must be established in the United States--specifically in the Grand Canyon and southern Rockies--for the species to survive. Mexican wolves should number at least 700 in the United States--not the 320-380 that the FWS calls for in the draft plan.

* The draft recovery plan relies too heavily on recovery in Mexico--despite the fact that habitat there is inadequate. Much of the land relied on for wolf recovery in Mexico is privately owned. Furthermore, prey numbers used in FWS's modeling exercises are unreliable and likely highly biased.

* The draft recovery plan does not sufficiently address the genetic threats facing the Mexican wolf. For example, the FWS allows for continued erosion of the genetic diversity of the captive Mexican gray wolf population--despite the fact that the genetic diversity of the captive population has already substantially deteriorated and retains only 83% of the founders' genetic diversity. In addition, the draft plan states that natural reproduction, rather than releases of captive wolves, will drive growth of the wild Mexican wolf populations. This will prevent necessary infusion of new genes into the wild populations and lead to further inbreeding problems.

* FWS hands control of releases of captive wolves over to the states of Arizona and New Mexico. This is problematic when the states have been actively hostile to Mexican wolf recovery, with New Mexico even filing a lawsuit to prevent such releases.

For years, Mexican gray wolves have struggled to survive in the wild. With this recovery plan, the FWS is charting the course for the future of this species: will it once again flourish on the Southwestern landscape, or will it go extinct? The current recovery plan overlooks the best available science and threatens the future of the Mexican gray wolf. Please address the shortcomings identified in this letter and craft a science-based recovery plan that will prevent the extinction of this magnificent and critically endangered species.
Sign Petition
SHAREShare this petition with friends!TWEETEMAILEMBED
Sign Petition
See more petitions:
You have JavaScript disabled. Without it, our site might not function properly.

Care2
Save the Last Mexican Gray Wolves from Extinction
SHARETWEET