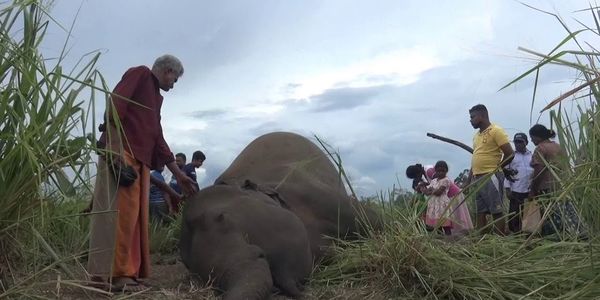 Sri Lanka's elephant crisis has reached a devastating peak, with 7 tragic deaths from poisoning in the Habarana environs – at Hiriwadunna and Thumbikulam Forest Reserve, a shooting in Asirigama, electrocution in Kakirawa and brutal deaths from train accidents in the North Central wilds. While these might appear to be isolated incidents, it is the result of a much bigger problem threatening the wellbeing of Sri Lankan's elephant population.

One part of the issue points at hundreds of elephants displaced from their traditional homelands as a result of government resolutions. During the seasonal drought when Sri Lanka's tank (or vava)-based environments dry out, it creates suitable grasslands for elephants and other herbivores. Minneriya, Kaudulla, Kalavava and most of our national parks are similar tank-based environments, where elephants have gathered around seasonally for decades, in search of food, water, their mates and to raise their calves.

Known as "The Gathering", Minneriya National Park is believed to attract the largest gathering of Asian Elephants in the world, a major tourist attraction bringing considerable revenue in foreign exchange, while creating employment for more than 5000 local community members dependent on wildlife-based tourism opportunities in the region.

Observations of the seasonal gathering of elephants in Minneriya and Kaudulla National Parks and Kalavava over the last 3 months, clearly indicate that the government decision to fill these tanks from the recently constructed Moragahakanda reservoir during the dry period, has led to a negative outcome of the seasonal "gathering" pattern of the elephants within their traditional homelands.

The situation is aggravated by the decision to establish a private-owned mini hydropower plant at the Ibbankatuwa tank in Dambulla that diverts its "used" water into Kalavava tank, without taking into consideration the inevitable displacement of hundreds of elephants, who gather during the seasonal drought.

These tragedies that have occurred are attributed to short term political decisions and a lack of coordination amongst relevant departments and ministries.

The Ministry of Tourism Development, Wildlife and Christian Affairs has neglected its duty to gazette the Kalavava Wildlife Sanctuary to the status of 'National Park', despite a Cabinet decision in 2017 giving local officials the power to prosecute illegal activities in the protected area.

These policy decisions with minimal concern for environmental and wildlife ramifications, negligence and a dereliction of duties of the concerned government officials and politicians have increased prevailing Human-elephant Conflicts (HEC) resulting in the loss of over 319 elephants in 2018 and 295 over the 9 months of 2019, among the "recorded" deaths!

Approximately 30-35% of the country's agricultural produce is also lost every year due to crop raiding by the displaced elephants and over 380 human lives have been lost over the last 5 years.

Thus, we request the Ministry of Tourism Development, Wildlife and Christian Affairs to take immediate action to:

2. Gazette Kalavava as a National Park based on the 2017 Cabinet decision and ensure the wellbeing of residents and migratory elephant herds numbering 225-250 elephants.

3. Protect the available tusker population in Kalavava and establish a monitoring mechanism of the pattern of elephant movement, as it is the largest living tusker habitat known.

4. Launch a study and declare migratory routes for residents and migrating elephants in the area to prevent further human encroachment into designated protected areas including Thumbikulam Forest Reserve.

5. Establish a pilot "crop" damage compensation scheme" to minimize the adverse impacts caused, due to the raiding of crops by elephants.

6. Design a suitable mechanism to prevent HEC in the region, based on scientific research.