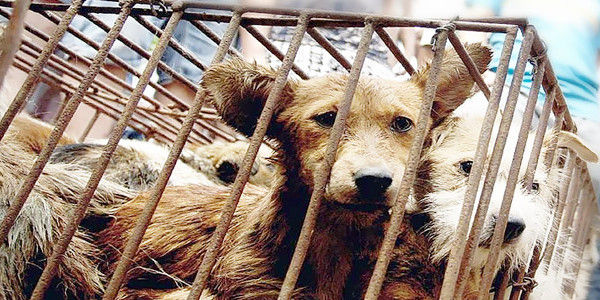 Sign the Petition to End the Chinese Dog Meat Industry

Nearly 60,000 outraged people have signed our petition to end the grotesque summer solstice dog and cat meat "festival" in Yulin, China, on June 15-21.

Thank you! Your collective voice has been heard!

How do we know? Because the global media is abuzz with rumors, contradictions, and mixed messages. Some say the Chinese Government has banned dog meat from the festival. Others say the ban is only for a week and doesn't include cat meat. Others say the event will go on as usual.

At North Shore Animal League America, we're doing what we can to help, despite the confusion. On May 22, we welcomed 16 dogs from Yulin to our Adoption Center, thanks to the Animal Hope and Wellness Foundation, which is working to end the brutal practice throughout Asia of torturing animals before slaughtering them out of the misguided belief that tortured dog and cat meat tastes better.

Marc Ching, founder of Animal Hope and Wellness, says this about the 2017 "festival." There is coverage…indicating that the Yulin Dog Meat Festival is over. That is not true. We have information coming directly from those associated with the government indicating the opposite. If and when the Yulin Dog Meat Festival does end…it will be because the people have spoken.

Please join our 60,000 signers. We must speak louder than ever for the beaten, tortured, and betrayed.

Together, with one voice, we can END this.