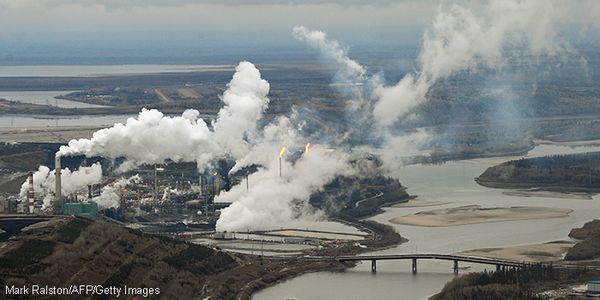 The science is indisputable. Burning fossil fuels accounts for more than 70 percent of global greenhouse gas emissions and is the primary cause of climate change. The ripple effects endanger the right to life, to water, food, housing, health, and an adequate standard of living. The list goes on and on. The survival of entire peoples is at risk.

That's why human rights experts have joined scientists to sound the alarm. A rapid phaseout of fossil fuels is necessary in order to protect the right to a healthy environment and all life that depends on it.

However, Canada and other rich, industrialized countries continue to fund the expansion of fossil fuels, condemning millions of people to the life-threatening impacts of worsening climate change.

Canada's House of Commons declared a climate emergency in 2019. Yet Canada's export bank, Export Development Canada (EDC), continues to direct billions of dollars in loans, insurance and other support to fossil fuel activity in Canada and other countries. EDC is one of the biggest public financial backers of fossil fuels in the world. This is a mass-scale assault on human rights.

We must speak up before it's too late! Canada must phase out all fossil fuels by 2030. However, Canada must ensure an immediate end to fracking and exploitation of oil sands, as these activities pose the greatest risk to the environment and human rights. The Canadian government and EDC must also stop financing fossil fuel expansion in Canada and around the world.

Amidst an escalating climate emergency that threatens the human rights of present and future generations, the contributing role and devastating impacts of fossil fuels are undeniable.

Scientists and human rights experts agree: a just transition away from fossil fuel production and use is necessary in order to protect the right to a healthy environment for all.

For this reason, I call on you to take the following action without delay:

- Phaseout all fossil fuel exploration and production by 2030 and ensure an immediate end to fracking and exploitation of oil sands, as these activities pose the greatest risk to the environment and human rights.
- Immediately end all financing and other support for projects, activities and industries that drive fossil fuel expansion in Canada and around the world.