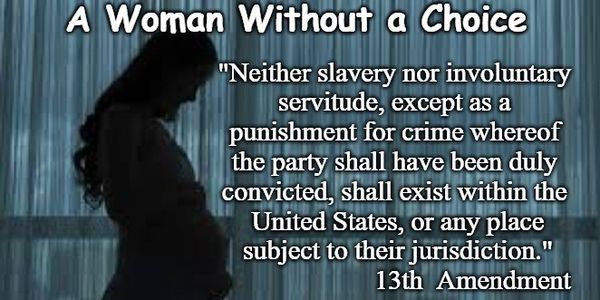 A Petition to Sue States for Involuntary Servitude Reparations

The Petition to for Involuntary Servitude Reparations

"We, the undersigned, petition Jackson Women's Health to sue the state of Mississippi for reparations to any woman forced to give birth to a child against her will. We also entreat Planned Parenthood to immediately request stays to any state laws that deny a woman the right to an abortion. Finally, we petition Planned Parenthood to represent any woman who wants to sue any state for damages and reparations to recover all the costs/expenses incurred by pregnancy, giving birth, and raising a child until they reach the age of 18.

Your Signature (in the form to the right)

The Legal Basis
Now that Roe v. Wade has been overturned, we believe Planned Parenthood should immediately request stays to any state laws that deny a woman the right to an abortion. We further petition Planned Parenthood to represent any woman in lawsuits they bring for damages and reparations for all costs/expenses incurred in pregnancy, giving birth, and raising and raising the child until they reach the age of 18.

We believe that the 13th Amendment gives standing to such lawsuits. It abolishes slavery in the United States and provides that "Neither slavery nor involuntary servitude, except as a punishment for crime whereof the party shall have been duly convicted, shall exist within the United States."  For any state to deny a woman the right to an abortion, against her will, and force her to carry, birth, be financially responsible for, and raise a child is the definition of de facto involuntary servitude. We ask Planned Parenthood to expeditiously pivot to aggressively initiate such class-action lawsuits in any state that prohibits abortions and denies a woman her right to choose.

A Financial Projection of Expected Taxpayer Liabilities
Let's take Mississippi as a lawsuit example. In 2019, there were 2290 abortions in Mississippi (most recent stats). According to current FAIR Health data, the average cost of having a baby through vaginal delivery is between $5,000 and $11,000. These costs include the total duration of care, the obstetrician's fee (including prenatal care), the anesthesiologist's fee, and the hospital care fee. Any lost revenue for a woman unable to work during this time would have to be computed on a case-by-case basis.

A sample projection of expected financial liabilities for Mississippi taxpayers to compensate all the women who would involuntarily bear and raise children in lieu of abortion is expected to add at least $52 million to their first-year annual tax liability.

The total liability cost for involuntary servitude increases by $52 million (in 2022 dollars) for each of the following eighteen years. By the 10th year, the additional annual liability reaches $520 million. By the time the first year's children turn 18, the total annual liability for all eligible women balloons to $936 million. Using the number of annual abortions in Mississippi, taxpayers will be liable to pay almost $9 billion a year for all 18 cohorts by the time the first cohort reaches the age of 18. From that point on, the total liability levels off at $9 billion per year.

We're willing to bet that if Mississippi voters knew NOW that their legislatures were committing them to pay $9 billion in reparations to all the women denied an abortion over the next 18 years, and then to keep paying it each year, they'd keep and/or legalize abortions quicker than a chicken on a June bug.

Now's the time to alert all American voters that if their state legislatures outlaw abortions, they'll be on the hook for paying crushing financial consequences!

If, after you read the "Petition to Planned Parenthood to bring lawsuits against States for Involuntary Servitude" you want to add your name, then I ask you to please sign it!

Are there other things you can do?  Yes! Spread the word as far and wide as you are able. Tweet the link to this petition to all your followers. Tweet and retweet again!

The more signatures we have, the greater our power to get that ball rolling. So, join us and make our will and our movement a tidal wave impossible to ignore! Remember always, it is "We the People" who are the masters of our fate and the captains of our souls.