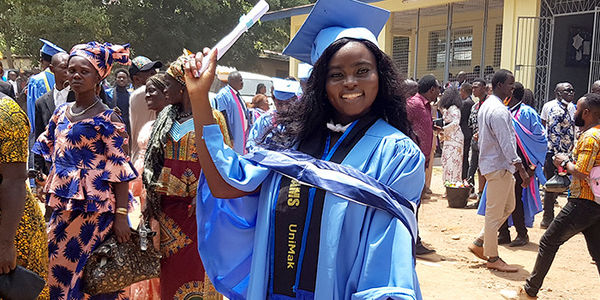 Help girls in Sierra Leone get an education and reach their potential!

Girls belong in school. But instead of getting an education, thousands of girls in Sierra Leone are dropping out to contribute to their households, or marrying far too young and starting families before they're ready.

"Instead of being encouraged to pursue higher education, we are often forced to become sexually active and begin producing children before our bodies and minds are fully developed,'' Betty says.

Betty was in Grade 3 when a man approached her father with a marriage proposal. Hoping to win her over, he began sending her family money, toys, and treats. After years of constant gifts, Betty agreed to marry the man when she was just 14 years old in hopes of helping to provide for her family, chasing the illusion of a better life.

Soon after, she became pregnant—which meant she would have to leave her school, her friends, and her dreams behind. "I wish I had known that this could turn into something that would cost me my education," says Betty.

It's devastating every time a girl is barred from reaching her potential. And COVID-19 has only made matters worse. With unemployment on the rise, more and more families are not allowing their daughters to return to school. Instead, they're caring for their families, finding work to help pay for food or marrying much too young.

No matter where you live in the world, access to education is the key to a brighter future.

In developing countries like Sierra Leone, going to school empowers girls to pursue their potential. It's also an opportunity to break the cycle of poverty, which often prevents families from seeing a girl's potential. Extreme poverty causes many families to see girls as a burden to marry off young, when they're especially vulnerable to exploitation, gender-based violence, early pregnancy or dying in childbirth.

However, when girls are in school they're better equipped to understand their rights and the importance of an education.

A girl who receives an education is more likely to secure a better-paying job and much less likely to marry or have children before she's physically ready. And educated girls become educated mothers—who not only have a better chance of surviving childbirth, but also often raise daughters who can pursue their own education.

It's a known fact that when women and girls thrive, they increase the standard of living for their children, their families, and their communities.

Every girl deserves her best chance in life! Will you raise your voice today to make sure young girls like Betty can return to school, access education and choose their own future?

Now more than ever, this year has shown us that we need to stand with girls around the world. Will you stand with us?

Disclaimer: Names, images and/or some details have been altered as appropriate to protect the identities of those in our care.

Care2
Help girls in Sierra Leone get an education and reach their potential!
SHARETWEET