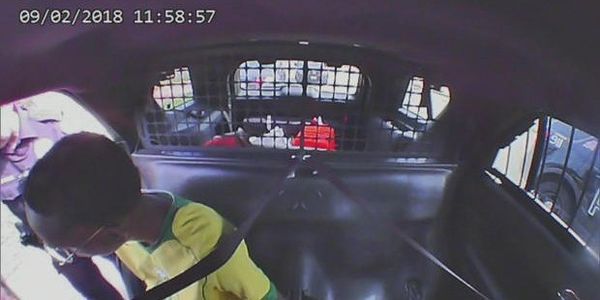 One minute 18-year-old Akil Carter was riding in the car heading to work, the next minute he's in the back of a police squad car in handcuffs.

Akil, who is black, was being driven to work by his white grandmother Paulette Barr, when they were stopped by a police car. The officers ordered him out of the car, and once he was in their patrol car, they went to check on Ms. Barr.

But the question both had was why the police had stopped them in the first place. Police say they were alerted by a black couple that two black men were robbing a white woman in the area. The couple apparently identified the vehicle for the police and then left without leaving a formal statement.

But when the police released the tapes, the mysterious couple was nowhere to be seen. What's more likely is the cops thought they saw something suspicious when they observed a young African-American man with an older white woman and decided to investigate.

While the Wauwatosa police department has defended the officer's actions, the potentially dangerous situation should have never happened in the first place. In fact, the family doubts that there ever was a black couple that alerted the police. What's more likely is that the officers racially profiled the young man.

Over the past year, news outlets have published a steady stream of articles about people calling the cops on black and brown people simply for existing. In Oakland, one woman called the police on a black family for using the wrong type of charcoal in their BBQ. In San Francisco a woman called the police on an 8-year-old girl for selling water in front of her house. And at Yale University, a woman called the cops on a fellow black student sleeping in the common room of their dorm. Now, add something as innocent as going to work with your grandmother to the list of things that could get you busted.

This case must be investigated. Racial profiling is illegal, it's oppressive and it puts black and brown people in danger. Wauwatosa Police Department (WPD) must do in inquiry into this case to find the witnesses and assess the validity of their officers' story. If not, these officers should be fired.