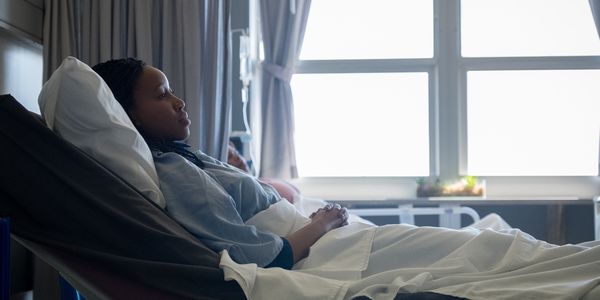 Black mothers are up to five times more likely to die from pregnancy-related issues than their white peers!

When Sha-Asia Washington arrived at the Woodhull Medical Center in Brooklyn on July 2nd, she was healthy, happy, and very pregnant. Past her due date by only a few days, she was there for a routine visit, accompanied by her boyfriend, the baby's father, Juwan Lopez. When doctors decided to keep her there so they could watch her blood pressure, it still didn't seem like anything to worry about. For two days, they declined to prescribe her any medications to reduce her blood pressure. On July 7th, they decided to induce labor, and even though Sha-Asia was hesitant, they gave her an epidural. Things began to fall apart, and doctors rushed the mother-to-be into surgery for an emergency c-section. When the ordeal was over, Juwan would leave the hospital with their beautiful, healthy daughter Khloe, but not Sha-Asia. The 26-year-old's heart had stopped, and she died before meeting her child.

Sha-Asia was Black, and hers is just the most recent story in a long, heartbreaking history of pregnancy-related deaths among Black women in the United States. Senator Kamala Harris of California has introduced legislation called the Maternal Care Access and Reducing Emergencies (Maternal CARE) Act, which would directly address "racial disparities in maternal health." Sign the petition if you want Congress to pass this bill without delay!

This is a national crisis. In the United States, black mothers are four to five times more likely to die from pregnancy-related causes than white mothers. Black women are routinely undertreated, disbelieved, and misinformed by those who are supposed to be caring for them. The problem is unbelievably complex, but it's not hard to believe it's happening -- many have drawn a parallel between the deaths of Black women in hospitals and the murders of Black men at the hands of police officers. Both the criminal justice system and the healthcare system are supposed to serve, protect, and provide care, but when it comes to Black people, they routinely disenfranchise, victimize, and ultimately kill.

As complex as this issue is, the solution will be equally so. Bias and medical racism are large contributors, as is a lack of access to quality healthcare and poverty. But these pregnancy-related mortality ratio disparities exist on every point of the education and financial spectrum -- meaning that Black mothers with more money, more access to healthcare, and more education are still dying at higher rates than their white peers. Essentially that means that something about the state of being Black in America -- the stress, the daily prejudice, and certainly so much more -- is contributing to these deaths.

That's why the Maternal CARE Act is so important! It takes a comprehensive approach to the issue of maternal mortality and the role of racism in its disparities. It would not only devote funds to fighting the presence of bias in the medical field, but also to identifying high-risk pregnancies and providing appropriate care and support so that these pregnancies do not end in these mothers' deaths.

Show your support for Senator Kamala Harris and the Maternal CARE Act by signing the petition urging Congress to pass this bill before more Black mothers die!

Care2
Black mothers are up to five times more likely to die from pregnancy-related issues than their white peers!
SHARETWEET