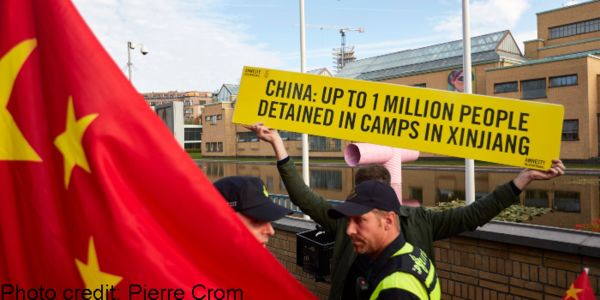 Since 2017, it is estimated that 1 million or more men and women from predominantly Muslim ethnic groups have been detained by the Chinese government in the Xinjiang Uyghur Autonomous Region. They are taken to "education" centres or internment camps and to prison for reasons including being an "untrustworthy" person; living or travelling abroad; having too many children; wearing religious clothing; or having WhatsApp on their phone.

From the moment they entered a camp, detainees' lives are extraordinarily regimented under "prison-like" conditions. They are subjected to physical and psychological torture and subjected to "political education" classes, which amount to indoctrination.

The Chinese government is doing this in an attempt to replace Turkic Muslim ethno-cultural beliefs and practices with secular views and behaviours sanctioned by the Chinese authorities. As a result, millions of people in Xinjiang live in constant fear of persecution for practising their own religion and culture.

The evidence we have collected shows that the Chinese government has committed at least the crimes against humanity of imprisonment, torture and persecution against Uyghurs, Kazakhs and other predominantly Muslim ethnic minorities.

The Chinese government must immediately release all people detained in the camps and in prisons, and dismantle the internment camp system.

I am distressed to learn about the cases of more than 60 people from predominantly Muslim ethnic groups who have been allegedly interned in camps or sentenced without a fair trial and sent to prison in Xinjiang. These cases are representative of the perhaps 1 million or more men and women estimated to have been detained by the Chinese government in Xinjiang since 2017.

Based on the evidence collected by Amnesty International in the report "Like We Were Enemies in a War", the Chinese government has committed at least the crimes against humanity of imprisonment, torture and persecution in Xinjiang. Lawful activities many of us take for granted such as living, travelling, studying abroad; communicating with people abroad; reciting the Qur'an or wearing religious clothing can be considered a reason to be sent to an internment camp or a prison, where detainees are subjected to a relentless forced indoctrination campaign, physical and psychological torture and other forms of ill-treatment.

Family members living overseas are desperate to get in touch with their loved ones, many of whom they have not heard from in years. Further to their desperation is the fact that, without any access to a lawyer of their choice, the detained individuals (mostly Uyghurs, Kazakhs and those from other predominantly Muslim ethnic minority groups) are at even further heightened risk of torture or ill-treatment.

I therefore urge you to:

Immediately release all people detained in internment camps and in prisons in Xinjiang, unless there is sufficient, credible and admissible evidence that they have committed an internationally recognized offence.

Pending their release, disclose their whereabouts, allow them access to their family and a lawyer of their choice, and ensure they are not subjected to torture and other ill-treatment.
Sign Petition
SHAREShare this petition with friends!TWEETEMAILEMBED
Sign Petition
See more petitions:
You have JavaScript disabled. Without it, our site might not function properly.