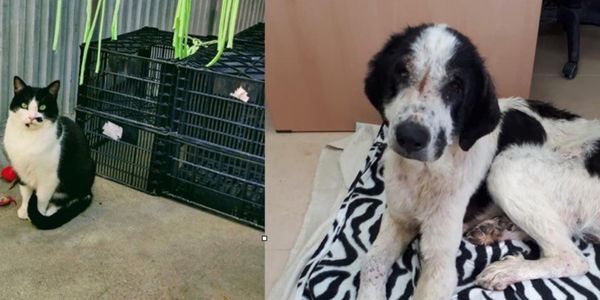 WE FIGHT FOR THE ANIMAL RIGHTS OF MAJADAHONDA CITY (in MADRID, Spain)

THE City Council FROM Majadahonda, MADRID, Spain OWNS A DOGPOUND (Perrera in Spanish) CALLED "CICAM" & WILL BE OFFERING A LEGAL TENDER ON JUNE 2018 TO FIND OUT A COMPANY which will be running THEIR PERRERA for a MINIMUM OF 5 YEARS. WE URGE THE City Council TO PRIORITIZE ANIMAL WELFARE versus ECONOMICAL CRITERIA, which they have not been doing up to now. AS A RESULT OF THIS THE RESCUED ANIMALS HAVE BEEN SUFFERING VERY POOR ATTENTION on all matters (vet, food, shelters buildings, etc…), with LACK OF EMPLOYEES to attend them.

THE MONEY WHICH has BEEN SPENT UP TO NOW for them IS FAR BELOW the ONE THEY REALLY NEED to RECEIVE a MINIMUM CARE. And MOREOVER, WE URGE THEM TO APPLY THE SPANISH ANIMAL WELFARE LAW ALREADY APPROVED BY THE SPANISH GOVERNMENT which includes THE whole MADRID Area, which until now has been avoided.

!!WE WANT THEM TO USE OUR TAXES ON WHAT THEIR OBLIGATIONS ARE !!

The City Council of Majadahonda allocates a low budget for the running of the City Kennel, called CICAM. Then at the time of opting for the different entities applying to run the Cicam under the tender option, they always choose the lowest budget, whatever they offer; therefore, making it impossible the animals are handled in appropriate minimum conditions.

Normally the management company which is choosen offers a smaller budget than the already offered by the City Council in order to win. As a result of this we face many short incomings that we list here below.

The only positive thing about the last management awarded company has been the praiseworthy and selfless work of its employees, who have left their skin for the animals, working overtime for free, since the staff is not enough and they had to do the job with good will. (A vet, a clerck, a cleaning man a few hours per day from Monday to Friday).

BUT THIS IS NOT ENOUGH. You cannot have people working overtime FOR FREE and trust on their good will so that the animals receive a good treatment. THIS IS THE WORK OF THE CITY COUNCIL TO ECONOMICALLY PROVIDE THE PERRERA WITH THE NECESSARY RESOURCES: ENOUGH EMPLOYEES AND ENOUGH MEANS,

AND THIS CANNOT BE DONE WITH THE BUDGET THEY HAVE FORECASTED FOR THE FUTURE MORE OVER IF THEY CHOOSE THE CHEAPEST "BIDDER" and this bidder comes in to make profit.

IMPROVEMENTS TO BE TAKEN INTO ACCOUNT for the next WINNER who will be running THE CICAM - for JUNE 2018 onward - Apply in full the LAW 4/2016 from JULY 22, Law on pets animal welfare within Madrid where money does not prevail, money we citizens have paid with our taxes, and really care about the animals, who feel, suffer but cannot talk and let us know.

Currently the Perrera CICAM lacks of the following:

1. Enough staff to adequately take care of the basic and special needs of the animals housed in the Center, animals which have been given by their owners, have been found by the police or had to be taken away from the owners due to bad handling.

5. Qualified staff on weekends to be able to do vet treatments, (minimum as veterinary assistant qualifications).

6. Qualified staff to clean on weekends. Cleaning starts on monday, not doing it on week-ends.

7. Quarantaine room and post-surgery room, both essential and that are still on project since years and have never been built, avoiding to comply with the animal law!

8. Adequate surgical and sanitary material in accordance with the Animal Law. Basic X-ray machine and Echograph.

9. Basic analytical tests. Set up an adequate agreement with a laboratory to handle this.

10. A well-equipped surgery room to perform sterilizations on a continuous basis inside the Cicam (Perrera).

11. A contract with vets urgency to be able to take care of sick animals at any time and offer them the necessary medical treatments.

12. Suitable facilities in the case of bad weather to avoid illnesses and deaths due to freezing, air currents, humidity in the shelters (this complying with the animal Spanish Law).

13. A closed running area for the cats according to Law.

14. A covered playing area, so that in summer the dogs can get out of their kennels without suffering the hot sun/heat.

15. An animal policy which encourages and facilitates adoptions with a broader time opening schedule.

16. To put in force the CES method as the only ethical control system for cats colonies which includes stelerizations.

18. Sign posts in order to properly indicate where the Cicam is located.

19. Adequate facilities within the Cicam as a general rule, repairing breakdowns / damages in drains, water pump, etc., which have been left over and over with no repair due to the shortage of budget.

20. Positive notoriety. The majority part of inhabitants of Majadahonda sees the Cicam as a tremendous place where animals are forgotten, do not receive adequate attention and therefore are difficult animals to be adopted. It is the City Council's duty to properly inform about what is being done with those animals.

21. General info about the CICAM to the people living in Majadahonda.

24. Volunteer program promoting same among the inhabitants of Majadahonda.

Today, the CICAM is being managed by a private company called Tahler, being last winner of the tender 5 years ago,on 2013. In order to win in front of others they lowered their bid from an amount of € 403,046.85 (excluding VAT) to € 325,661.85 (VAT excluded). Of course once they take out their own benefits (a private company does not work for free) from this amount, pay wages, taxes, stroam, water, vehicles buying, etc… the remaining goes to the animals. Which means almost nothing!! Resulting a monthly amount of € 5,427.69 (VAT excluded). Totally far below to comply with a minimum adequate maintenance of an animal shelter capacity of about 30 dogs and 40 cats.

Las Rozas City Council, a town next to Majadahonda, with the same characteristics as Majadahonda budgeted around € 20,000 per month in 2016 and the Asociación Abrazo Animal (a non profit animal welfare association which does not requires to make benefits) won with 864,818.64 € (VAT excluded) for a 4 years time, resulting a drop of only 5% from the initial amount offered by the City Council and meaning an amount of € 17,000 per month (excl. VAT). Almost same towns but € 17,000 per month budget for Las Rozas and € 5,427 for Majadahonda. This so big difference does not make sense and does not allow to take good care from the Animals sheltered in Majadahonda

Therefore, please HELP US and OUR ANIMALS so that THE CITY COUNCIL OF MAJADAHONDA COMES OUT WITH A GOOD TENDER REALISTIC OFFER, ACCORDING TO THE ANIMAL SPANISH WELFARE LAW and WHAT OUR RESCUED ANIMALS REQUIRE.

SAVE MONEY SHOULD NOT BE THE ONLY MAIN THING TO BE TAKEN INTO ACCOUNT as ANIMAL WELFARE is OUR MOST IMPORTANT GOAL.

PLEASE SIGN and SEND EMAILS stating your support to our animals to our government personalities envolved in this welfare: