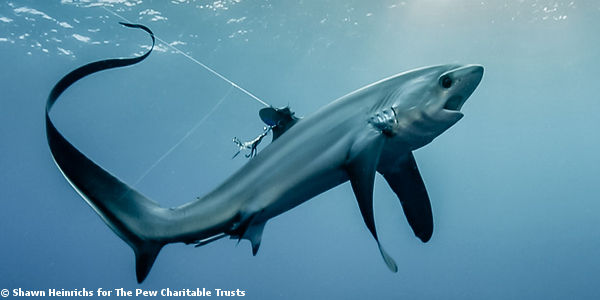 Sharks are under attack in Hawaii, and we need your help!

In response to an overwhelming outpouring of support from Hawaiians for the protection of sharks in 2010, the state legislature passed a bill to make Hawaii the first jurisdiction in the country to ban the trade in shark fins. But now, a proposed rule by the federal government could wipe out these critical protections!

Hawaii paved the way for California, Washington, Oregon, Illinois, Delaware, Maryland, New York, Guam, Northern Mariana Islands, and American Samoa to follow our lead and pass similar legislation to protect sharks. Now the time has come for Hawaii to lead again to ensure that these vital conservation laws are preserved.

The global demand for shark fins and other shark products has put these species on the path to extinction. Approximately 100 million sharks are killed each year, and as a result more than half of all species of sharks and shark-like species are threatened or near threatened with extinction. Sharks grow slowly, reach sexual maturity relatively late in life, and only produce a few offspring at a time, so they can't quickly replenish their populations when they are overfished.

As your constituent, I respectfully urge you to stand strong in defending Hawaii's 2010 shark protection law, which prohibits trade in shark fins, and to do everything in your power to prevent federal preemption of this critical state legislation.

The National Oceanic and Atmospheric Administration recently issued a proposed rule for a 2010 federal law known as the Shark Conservation Act. The agency believes that the Hawaii state law conflicts with the requirement for "optimum yield" in federal fishing rules and should be preempted by federal law. The federal Shark Conservation Act was intended to strengthen shark protections in federal waters, and 62 members of the U.S. House of Representatives and 11 U.S. senators have gone on record to assert that it was not the intent of the act to preclude states from passing additional restrictions on trade in shark fins. These include members of Congress from 10 states and territories with some of the leading shark fin trade bans in the United States: Hawaii, American Samoa, California, Guam, Illinois, Maryland, Oregon, New York, Northern Mariana Islands, and Washington.
Humans kill approximately 100 million sharks each year, and as a result more than half of all shark and their related species are threatened or near-threatened with extinction. The global demand for shark fins and other shark products is fueling the demise of these species. Laws like the one in place in Hawaii are critical to conserving sharks.

Hawaii is a leader in shark conservation, and it was the first jurisdiction in the country to pass such a law, paving the way for California, Washington, Oregon, Illinois, Delaware, Maryland, New York, Guam, Northern Mariana Islands, and American Samoa to pass similar legislation to protect sharks.

Thank you for your strong statements opposing federal preemption of Hawaii's shark protection law in 2013 and for safeguarding the state's sharks. I ask you to renew your support and lead again on this issue to ensure that Hawaii's shark protections remain in place, so these animals can continue to benefit the entire marine ecosystem and bolster tourism for generations to come.

Care2
Sharks are under attack in Hawaii, and we need your help!
SHARETWEET