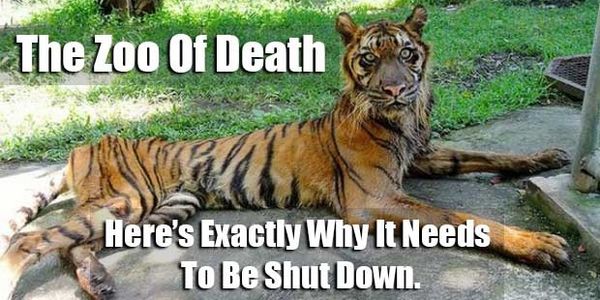 Close Indonesia's Surabaya 'Zoo Of Death' NOW. How Many More Cases Of Animal Abuse Are Needed??

An Indonesian zoo which activists have described as "horrific" and "soul destroying" is under renewed scrutiny after the release of a video which appears to show undernourished sun bears begging tourists for food. Earlier videos released by the same group, Indonesia-based NGO Scorpion Foundation, show elephants at the Bandung Zoo in West Java in shackles, deer with a "shockingly bad" skin condition, and a sun bear which appears to be eating its own faeces — an activity described by animal experts as stemming from boredom. The latest controversy comes after the zoo was temporarily closed last year following the death of a Sumatran elephant known as Yani, found with bruises on its body. The Jakarta Globe reported that the head of a local conservation agency had described the cause of Yani's death as "neglect". The zoo's only veterinarian had resigned in 2015.

Numerous online petitions have sprung up calling on Indonesia's President Joko Widodo to intervene and shut the zoo down, with change.org and Care2 petitions garnishing more than 300,000 signatures each. Bandung's mayor, Ridwan Kamil, told reporters in 2015 that he had no power to shut down a privately run zoo.

Bears thin but 'healthy' spokesperson says But a spokesperson for the privately owned zoo has reportedly claimed that this is an "old case" and that there is no problem. "People say they are thin, but does (that) mean they are not healthy and they are not eating? It's not," Sudaryo told BBC Indonesia Reviews of the zoo on crowd-sourced travel tips website Trip Advisor are typically scathing, with numerous commenters urging people not to visit the zoo, and to shut it down. "The animals are dying of neglect," wrote one commenter in August of 2016. In May 2016, another person described the zoo as "a horrible place, hell on earth for these poor animals". The Bandung Zoo is one of many in Indonesia to be accused of maltreatment of animals. In 2013 the ABC reported that 50 animals died in three months at the Surabaya Zoo, including an orangutan, three tigers, and a giraffe. At the time it was dubbed the "zoo of death".

Please share far and wide and close the Zoo of Death NOW!

How many more cases of animal abuse are needed before Surabaya 'Zoo of Death' is closed?

Animals play an key part in maintaining the ecosystem of the planet and we all have the responsibility to protect and preserve them for proper balance. Sometimes they are kept in Zoo, as the forests are declining at a rapid rate and they need a proper place to stay. But what happens when they are treated in worst manner in that habitat and denied of basic amenities like food and proper living conditions — they die.

So, here is Surabaya Zoo in Indonesia which has been called as the Zoo of Death and it has become a nightmare for the animals kept there. They are not only denied of proper nutrition and living conditions, but they do not even get the basic care like and die due to starvation.

I respectfully urge you to close it immediately.