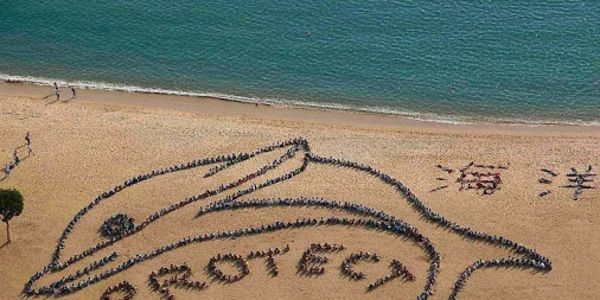 The news of a dolphin born on the 9th of February to mom, Khethiwe, at Durban’s

uShaka Sea World first broke on the 17th of February. On the 18th of February, the calf was reportedly “doing very well”. uShaka went on to say via their Facebook page that “uShaka Sea World staff are monitoring our new arrival around the clock, but are confident that "Baby" will grow to be a fit and healthy dolphin.” Sadly however, the very next day, uShaka spokesperson, Ann Kunz, broke the news that “Baby” died on the night of the 18th. Less than 12 hours after the calf, according to uShaka, was confidently “fit and healthy”.

This leads to the obvious question: What went wrong? Why the sudden tragic turn? uShaka has stated that a pathology test will hopefully shed light on what caused Baby’s untimely death.

We know it’s not completely uncommon for dolphin calves to die within the first few weeks. There are many contributing factors. However, most agree that such factors are exacerbated when calves are born in captivity. Some suggest that it is estimated that less than 20% of those born in captivity reach maturity.

Young dolphin calves must swim continually to stay afloat as their tails are soft and often take weeks to become rigid enough for efficient swimming. Mothers will also progressively take the calf longer and deeper underwater so as to increase the calf’s lung capacity. For calves born in captivity, cramped in a small and shallow tank, this natural mother–calf interaction (which is vital for its survival) is severely hindered.

Another contributing factor is that many die from infection caused by a weak immune system. Antibodies from the mother need to build up and stabilise the young calf’s immunity, both in wild- and captive-born calves.

Calves are particularly prone to develop a wound infection as every scratch on their delicate skin is potentially lethal until their immune system develops. It has been observed that mothers in captivity will attempt to guide the calf away from the walls of their concrete tanks to avoid such injuries.

Gabrielle Harris, head trainer at uShaka Sea World, reports in an in-house bulletin (Bulletin #22 of 1995-1996) that: “When a dolphin calf is born, its senses and swimming skills are not fully developed. It relies on its mother to find its bearings. Scientists have even postulated that the whiskers that the young calves have for the first few years of their lives are nature’s way of helping the youngster find its mother’s slipstream. It must be very difficult for a mammal to give birth in the ocean. In a dolphinarium, these problems are compacted because of the fact that the animals have to negotiate walls in their pools. Bearing this in mind, it is important to remember that the new calf’s immunity has not developed until it has suckled successfully. Therefore, any injury incurred has the possibility of becoming septic and killing the youngster. Cases such as this have been extensively reported.”

uShaka’s solution to this? A “maternity pool” – which is essentially a net fitted into a pool. Yet, despite precautionary measures, captive-born babies are still dying far more often that their wild counterparts. According to another uShaka Sea World bulletin (Bulletin #29 of 2002-2003), “Frodo, our second bottlenose dolphin, gave birth to her eighth calf. She was cared for in the maternity pool, together with three dolphin “midwives”. Initially, all appeared fine but after day nine it became apparent that Frodo had rejected the calf and elected to end its life.” A post-mortem confirmed “death by trauma”.

So in layman’s terms? Frodo drowned her calf. Coincidentally, as it turns out, Frodo, grandmother to Baby, was according to uShaka’s Gavin Drysdale, acting as a “midwife” to the calf born on the 9th of February, helping young mom, Khethiwe, care for the young dolphin.

For the sake of argument, let’s consider the following: if a “fit and healthy” baby dies mysteriously overnight, with Frodo acting as caregiver, is it possible that Frodo, after spending 35 years locked in a barren tank, frustrated and possibly mentally unstable, could have drowned Baby just as she did with her own calf, a calf that also appeared healthy and likely to thrive?

The biggest mystery surrounding the birth of Baby is: who was Baby’s daddy?

Out of the 11 captive dolphins held at Durban’s Sea World, 8 were born at the facility – all being the offspring of either Gambit (male), Kelpie (male), or Frodo (female). Gambit was the grandfather and Frodo the grandmother to Khethiwe’s calf. The only male not related to Khethiwe is Kelpie; and therefore is the only male suitable for breeding with Khethiwe. Kelpie is 30 years old and has only successfully sired one female twenty years ago. What this means is that, as the father of Baby is unknown, with 5 possible “daddies”, there’s just a one-in-five chance that Khethiwe’s calf was not the product of in-breeding. Or, put differently, there’s an 80% chance that Khethiwe was impregnated by either her father or one of her brothers.

uShaka Sea World's Gavin Drysdale confirmed during an interview with East Coast Radio on 17th February that Baby’s paternity was a mystery. This, despite the fact that uShaka Sea World has given every assurance that any interaction between the dolphins is always monitored. How something like this “slips in” unnoticed, considering that nearly all of the dolphins are siblings is, in itself, a major cause for concern.

Now, you didn’t have to get an A in biology to know that weak genetics make for weak babies. Experts the world over agree that the sole purpose for captive breeding should be to ensure genetic viability, avoiding the many health problems that arise from in-breeding.

When pressed during a follow-up interview with East Coast Radio on 20th February, two days after Baby’s death and following wide-spread public criticism, Gavin Drysdale said: "Our scientists and biologists are totally assured that there are no in-breeding issues here. We do manage the population well and we fully understand how the dolphin pods work [and] how their reproduction happens in the wild. In this case, the baby's demise was definitely something else.”

Despite his total assurance and understanding of a dolphin’s reproduction, he was still unable to name the father of the baby, or whether a DNA test had been conducted and concluded in the three days since his first interview to confirm that Baby was not the product of incest.

Alarmed by uShaka’s dwindling gene pool, local NGO “POD SA” enquired from Judy Mann, head of SAAMBR, back in February of 2013, the nature of uShaka’s breeding programme. Judy Mann ignored repeated requests to provide any information of the sort.

When asked to comment on the birth and death of Baby, Norma Patrick of “POD SA” said: “We, at POD South Africa, find it disturbing that a facility operating on public funding refuses to answer basic questions regarding the animals in its care. We particularly found it disturbing that uShaka did not announce that Khethiwe was expecting, leading us to believe that they have experienced miscarriages or still births in the past. It is also alarming that they did not announce the birth of the baby dolphin until a week later. One would assume from this action that they have had deaths of newborns. As there is a large international interest in dolphins in captivity, it is of concern that a “scientific” centre chooses to hide evidence from the world. A facility with nothing to hide would be open and amenable to the sharing of information.”

Soon after uShaka Sea World went public with the news of the birth of Baby, social media were abuzz with many South Africans expressing their concerns regarding the unknown paternity of the calf. Many went on to question the ethics of breeding in captivity for entertainment purposes. Instead of uShaka Sea World responding to these concerns and reassuring the public, any comment considered at all challenging was immediately deleted and the author of the post blocked from further commenting on any of uShaka Sea World’s future posts. This from a body financed by public and municipal funds. We believe it is inherently dishonest to remove posts that are expressing a sincere concern regarding the animals in its care. In effect, it gives a distorted and corrupted view to members of the public, shareholders, and international tourists that the South African public, as a whole, supports not only its often questionable operations, but that we also approve of keeping and breeding dolphins in captivity, even if it is through in-breeding. It amounts to censorship; restriction of freedom of speech; and violates the foundation of democracy.

We strongly feel that as uShaka Sea World is running out of fresh (non-related) stock, and as their dolphin population is aging; young blood is needed to keep an unethical industry afloat.

In addition to a full post-mortem, we at Ocean Watch SA demand that a DNA test be conducted on the remains of Baby to determine its paternity, and whether uShaka Sea World is indeed in-breeding the animals in their care.

Care2
Tweetstorm - Who's the Daddy? #uShakaDolphinShame [When] Saturday, March 1, 2014 [Time] 7:00pm until
SHARETWEET