If you wish to avoid the graphic images, please hit the "end" button on your keyboard and scroll up slowly to reach the signing section. Thank you.

** ALL NAMES ACQUIRED WILL DOUBLE THE ENFORCEMENT OF ANIMAL LOVERS UNITING TOGETHER TO SAVE THE LIVES OF THE INNOCENT. **
KOREAN GOVERNMENT'S NEW ATTEMPT TO LEGALIZE
DOG-MEAT 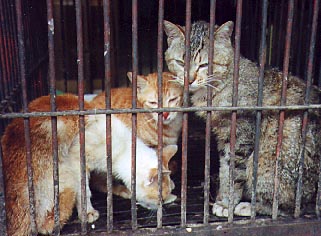 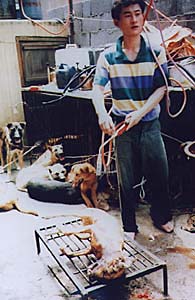 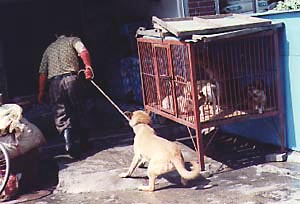 The Ministry of Agriculture’s report on Comprehensive Measures for Animal Protection will form the basis of their next draft Amendment. The measures emphasize raising the effectiveness of Animal Abuse Prevention Systems, strengthening protection/ management of stray animals and lab animals, and making those who own or sell animals more accountable to the occurrence of stray animals and its impacts on public health and safety.

The report’s measures still save the positive aspects of the previous draft Amendment. The penalties for abusing animals, for instance, is much stronger compared with the 1991 Animal Protection Law. (It is proposed that the abuser will receive prison sentence up to 6 months and the amount of fine payable is 10 times more than the previously set amount.) Efforts will be made to reduce the number of strays and regulate pet animals sales business.

One crucial and encouraging difference is that there is no mention of the definition of pet animals, which could have provided legal justification for the distinction between pet dogs/cats and food dogs/cats. In the previous draft, the introduction of the definition of pet animals formed one of 6 major contents in the Amendment. Together with the phone call Sunnan received, we are very hopeful that the Ministry of Agriculture actually decided not to attempt to protect the interests of dog and cat eaters through Animal Protection Law. Our optimism is strengthened by the fact that Comprehensive Measures for Animal Protection make it a duty to register dogs or cats for anyone who breeds or sells them, not just for those who breeds or sells them as companion animals.

The Measures also use the term ‘companion animals’ instead of ‘pet animals’ and makes it a duty of a local government to provide facilities to protect stray animals. It also defines, as animal abuse, dogfights, dog racing, and killing stray animals for food. As such, the new Amendment will be an improvement to the current Animal Protection Law.
Below are major changes from the current Animal Protection law:

Acts of animal abuse are specified and penalties for committing animal abuse are strengthened. Specific examples of animal abuse are to be provided in the Amendment. Dog fighting, dog racing, and giving away animals as a prize in a competition are also defined as animal abuse.
An Animal Protection Inspection System will be introduced. The qualifications for and the powers of Animal Protection Inspectors will be specified in the Amendment.
Those who want to run businesses that sell companion animals for profit (includes businesses that breed pet animals) should report to the Mayor or County Magistrate.
Those who sell animals are not allowed to sell animals that are too young and should hand the health certificate (or the vaccination certificate) to the purchaser of the animals when carrying out sales transaction.
Securing a stray animal protection facility is a duty of the head of the local government. The Animal Protection Law will state that cities with population over 500,000 should provide and run facilities of a certain size that will be specified. Catching stray animals to sell them for food or killing them will be regarded as animal abuse and will be punishable by law. It is, however, permitted to euthanasia stray animals for unavoidable reasons, including cases of disease or serious wounds.
A lab animals management system will be established. Those who set up laboratories will be required to report to the head of the Medical Inspection Institution. Facility standards for labs to protect animals and prevent accidents will be specified. Ways of limiting unnecessary animal experiment and banning animal experiment for luxury items will be considered.
Animal Protection education will be strengthened. Primary school and Kindergarten children will be given related education to discourage the purchase of companion animals for mere curiosity.
Amendment schedule: Consult related organizations and draw up Amendment, mid October, 2004; Consult related departments and notify legislation in advance, between mid October and mid November, 2004; Parliament submission, March, 2005; and Enforcement, 2006.