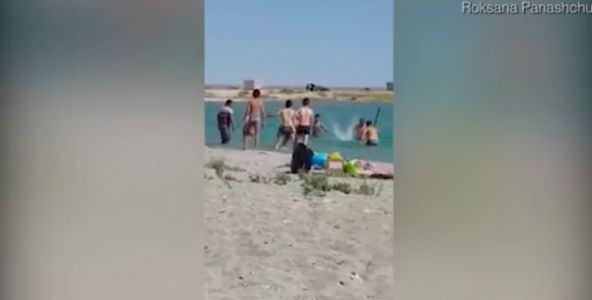 Seals are sweet, puppy-like marine mammals, but unfortunately they suffer a lot of human abuse. In fact, recently a group of men at a Kazakhstan beach took metal rods into the Caspian sea to beat a seal until it passed out. Why would they do this? Apparently so that their children could take pictures with a severely injured animal. Worse yet, this is the same beach is where not long ago, a group of people threw rocks at another defenseless seal. Obviously, the local authorities are doing nothing to protect local animals.

Please sign the petition to tell Kazakhstan authorities that they must protect the wildlife in their oceans from heartless people!

The video of the group of men wading into the water and beating the seal is horrifying. That seal was a free, living being and did not deserve such a violent beating from a mob of men with metal rods. Once they beat it so badly that it passed out from pain, they dragged it onto the beach for children to take pictures and "play" with. What kind of parent maims an animal and then has their child hang out with its unconscious body?

After the ordeal, the men tossed the animal back to sea, unconscious. If it did survive, it is certainly disabled. What's more likely is that it died a slow and painful death at sea with severe injuries. This kind of abuse is truly abhorrent and must be stopped.

Because another seal had just been attacked on the same beach with no consequences for its abusers,this group must have thought they could get away with a similar cruel act. To prevent this from happening again, we need the local authorities to actually do something to protect the seals who come to their beaches.

Sign the petition to demand real protection for seals!