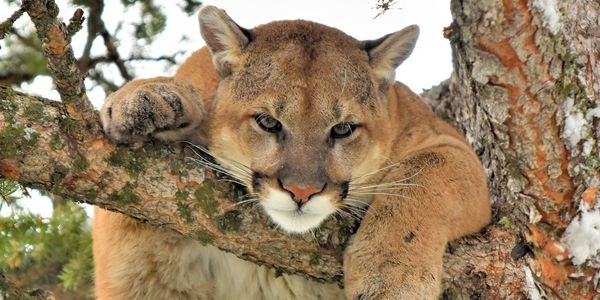 Montana Governor Greg Gianforte Forced Dogs to Chase a Terrified Mountain Lion Into a Tree, Then Shot It Dead

For Greg Gianforte, murdering innocent wild animals is a beloved pastime. Just last year, the Montana Governor killed a wolf in Yellowstone National Park – on top of that, he did it illegally, without the proper certification. Then, only a few months later, Gianforte shot a mountain lion that hounds had chased into a tree. Clearly we can't rely on the Montana Governor to protect the state's megafauna, since he is so decidedly committed to shooting them. Instead, we must put pressure on the Montana Fish and Wildlife Commission to take the reins and protect the state's vital species.

Sign now to demand that the Montana Fish and Wildlife Commission make it illegal to hunt and kill mountain lions!

Using hounds to drive the lion up the tree, Gianforte executed the poor animal, who was known by local biologists by its GPS tracking collar -- a strategy often used by conservationists to track and research the rare species. Not only is this a huge blow ecologically. Killing the mountain lion in this way was exceptionally cruel – it was forced to die in a terrified state high off the ground, surrounded by barking, growling hounds who were forced to do Gianforte's dirty work.

Yet everything Gianforte did to the mountain lion is technically legal in the state, perfectly demonstrating the brutality of the law. Clearly, these policies are crafted to protect very specific people: the rich and powerful who have the time, money, and resources to galavant around public lands shooting animals at will.

Montana's mountain lions, just like its wolves, deserve to live their lives free of threats from emboldened hunters. The highly intelligent creatures are entitled to the solitary lives that they prefer, and there is no reason civilians should be able to simply track, hunt, and kill mountain lions at will.

Sign the petition now to put pressure on the Montana Fish and Wildlife Commission to stand up for mountain lions and make hunting them and killing them illegal!