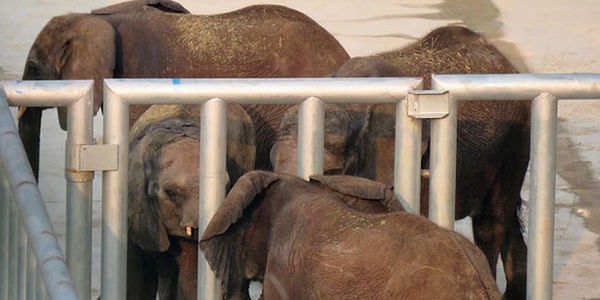 NO MORE EXPORT OF BABY ELEPHANTS! STOP EDEN GAME FARM IN NAMIBIË FROM SELLING 5 BABIES TO A DUBAI ZOO!

THESE ARE THE FACTS:
-A game farm in Namibia has been issued permits to sell five baby elephants to a zoo in Dubai. The elephants range in age from four to eight years old.

The sale, at an undisclosed price, will be finalised later this year when the elephants are exported.

The sale of baby elephants from Zimbabwe’s Hwange National Park to a Chinese zoo in 2015 received heavy criticism.

A spokesman for the Namibian Ministry of Environment and Tourism (MET) has confirmed that all CITES requirements have been met for the issue of export permits, and that the United Arab Emirates CITES Scientific Authority has issued the necessary permits for importation of the elephants.

Eden Game Farm is a private game farm and registered game dealer in the Grootfontein district, near Etosha National Park. The farm is owned by a Swedish national.

The sale of baby elephants from Zimbabwe’s Hwange National Park to China in 2015 attracted heavy criticism from wildlife experts and activists alike, after some elephants died and others showed signs of malnutrition and neglect.

The MET spokesman said he was not concerned about the same happening in this instance, as Eden Game Farm had satisfied all the relevant compliance procedures. He said that the baby elephants would be kept in isolation after capture, and inspected prior to exportation to make sure they are in good condition. He also explained that baby elephants need to be tamed after being separated from their parents, to reduce the stress.

MET previously sanctioned the export of 150 wild-caught animals (including elephants, rhinos, lions and leopards) to a zoo in Cuba, a project dubbed ‘Noah’s Ark II’, which proceeded despite significant opposition from many quarters.

-Elephant expert Joyce Poole says separating baby elephants from their mothers and herds is unethical! " “Elephants are highly intelligent, self-aware, and socially complex animals,” she said. “They feel joy and grief and are capable of empathy. Like us, their emotional well-being depends on being cared for and raised in the context of close family relationships.”

The notion of forcing babies away from their kind, is horrifying to Poole. “Abducting baby elephants from their families is traumatic for the entire family and causes great and long-term suffering to the captured calf. Confinement of these large and highly social animals in captivity causes a myriad of physical and psychological ailments and early death.”
Also: "“The prisoners are so stressed, they’re always crying for their mothers. They sometimes take days without eating because of stress. In the process some became very weak.”
- Those who are taking the decisions in this sad story think with food and some taming they can let the baby elephants forget where they came from... That their mothers will not mourn, as to the whole herd... There is enough scientific prove that zoos are nothing more than prisons and its habitants prisoners.
- We demand an immediate stop of these vicious plans to take these babies from their mothers, from their family, from the wild. Real elephant conservation takes place on the ground, in their own habitat, in their home country, on the ground where they are born.
Don't tear those families apart.

Picture: the Zimbabwe baby elephants after arrival in China, looking depressed, lonely and some of them sick.

read petition letter ▾
Dear Minister, All over the world, concerned nature lovers, animal advocates, animal activists, environmentalists, elephant advocates, have signed this petition because they don't agree with the fact that your government is approving the sell of five baby elephants to a Dubai Zoo. Although all the paperwork and the legality of this transaction may be official, the whole trade has to be seen as UNETHICAL.  Research, scientific investigation, numerous studies have already proven that elephants are very highly intelligent, sentient, social beings. Their relationships and family bondings are very close and for a lifetime.. Tearing those families apart is a very traumatic experience not only for the babies, the mothers but for the whole herd. They suffer tremendously and for a very long time.  Elephant Experts Joyce Poole, Carol Buckley, Lek Chailart and many others condone this kind of actions. It is not because something can be done legally, that is is ethical. The lonely boresome life in a Zoo, the monotony of the life there, the restriction of their possibilities, are the reason many captive elephants suffer, have mental and/or physical health problems, such as foot problems, arthritis... A zoo is not a place, you would wish to live in, when you once knew the safety of your family, the wild plains to roam on, the wild air of Africa.  Please reconsider your decision and stop this transaction immediately. Real conservation actually is on the field itself, by attracting many tourists who want to see the precious wildlife in Africa and not in an unnatural place like a zoo in a strange country, where they do not belong. By selling them, you get a once immediate sum of money. By creating wildlife game farms where the animals can roam free, you will have a constant income, by many visitors, year by year. This is a long term vision, much more valuable then a one time transaction.  -We hope to have convinced you to take the right decision in this matter. Regards,
Sign Petition
SHAREShare With FriendsTWEETEMAILEMBED
Sign Petition
See more petitions:
You have JavaScript disabled. Without it, our site might not function properly.