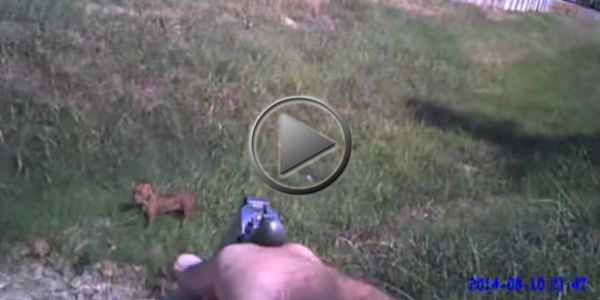 Click the image above to see the viral video showing a Texas police officer who shot and killed a 6 month old puppy in cold blood. Then sign this petition to demand that Cleburne police terminate Officer Dupre immediately.

In August, 2014 officers in Cleburne Texas responded to a call. The officer claims that a dog began acting aggressively toward him and that is why he shot and killed the dog. But the officer was wearing a body camera that shows otherwise.

This video is very graphic to watch, but in order for us to get to the truth we must watch. The video clearly shows Officer Kevin Dupre calling the dog with kissing noises -- the kind of sound that a 6 month old puppy associates with human kindness and play. As the 6 month old Maximus came running to the officer's call, he was clearly wagging his tail and excited as though he knew he was going to get a treat or pat on the head. What happens next is horrifying: Dupre coldly aims his gun and shoots the dog numerous times, killing him.

Another dog, a female named Cocoa, can also be seen in the video. The officer had Cocoa in his target sight and the next bullet was fully intended for her. Cocoa originally ran from the sound of the gunfire but stopped and turned around facing the officer. She stood there and she did not know that she was next to die! Thankfully Animal Control called the officer just in nick of time to prevent her from being murdered in cold blood.

Officer Dupre made claims that the dog was clearly aggressive, baring its teeth and growling. But in this video it is quite clear the 6 month old Maximus in no way charged or seemed aggressive but excited and playful. The dogs were distanced from the officer and posed no danger. Officer Dupre himself was the one who steadily enclosed in on the dogs, moving forward to them prior to him shooting and killing Maximus.

We are ashamed and disgusted by the cowardly acts of this officer! It's up to us to demand that the police not turn their head from this story. This killing is totally unjustified and a vibrant young puppy died a horrible death. This puppy was loved and his owner Amanda Henderson was left devastated.

The officer could have easily waited for Animal Control who was dispatched and trained in animal apprehension to arrive. Officer Kevin Dupre took it on himself to kill Maximus.

Sign this petition to join the call demanding that Officer Kevin Dupree be terminated immediately and charged with felony animal cruelty.

TO VIEW VIDEO OF ACTUAL SHOOTING PLEASE CLICK THE PHOTO AT TOP OF THE PAGE. WARNING!!!! GRAPHIC!!!!

We demand you terminate the employment of Officer Kevin Dupre. Video evidence has revealed that the officer has murdered a dog that was not a threat to his safety, and that the officer in fact lured the animal out of hiding to shoot it.