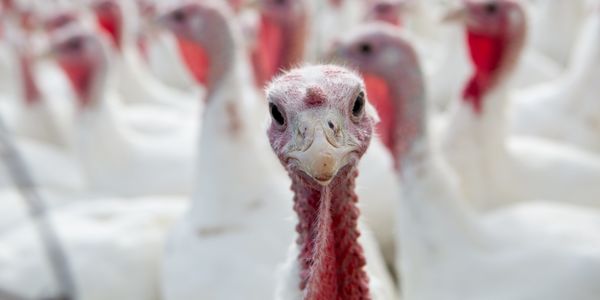 Turkeys Are Beaten, Stamped, Flung By Their Necks, And Much Worse. Tell These Grocery Stores to Stop Selling Abusive Plainville Farms Products.

Care2 Update (11/7/2022): Eleven Plainville workers were caught on video kicking, stomping and beating turkeys at several farms. Authorities charged the workers with animal cruelty, but companies must do better. Plainville continues to advertise its turkeys as "humanely raised" in a "stress-free environment," when that is clearly a lie. Sign and share to demand stores stop selling Plainville Farms products!
---
As Thanksgiving approaches, millions of Americans are headed to the store to buy turkeys for their holiday feasts. A lot of them may be unknowingly buying from a supplier that promotes the violent abuse of innocent turkeys.

The company claims that it has always committed itself to the "highest standards of animal welfare," but these shocking videos have exposed the reality: that animal welfare really isn't their priority at all, only profits.

In response to the videos, Whole Foods has dropped Plainville Farms as a supplier and removed all of their products from their shelves, an important step toward setting a higher standard for all meat suppliers. Now, other major grocers should follow suit and take a stand against the painful abuse of innocent animals.

Just under 50 million turkeys are expected to be eaten this year on Thanksgiving, and Americans will be spending significant money on food in preparation for the big holiday. Now is the time for grocers to remove Plainville Farms' products from their shelves -- this supplier should not be receiving profits selling turkeys that are victims of animal abuse. Demand that Publix, Wegmans, and Harris Teeter cut ties with Plainville Farms now!