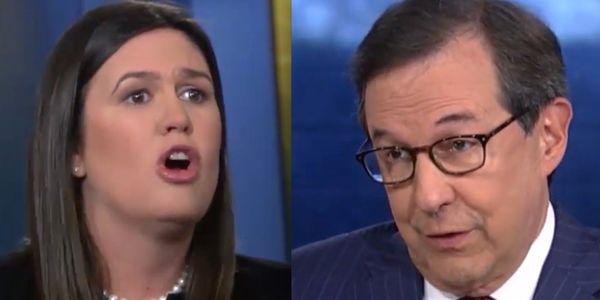 In the White House's desperation to continue fear mongering about the "dangers" of the southern border, Sarah Huckabee Sanders has been peddling the claim that the Department of Homeland Security has already stopped 4,000 known or suspected terrorists in the last year. By appealing to a fear of terrorism, she hopes to manipulate the population into supporting Trump's border wall.

But even Fox News has debunked her claims.

The data that she's referring to comes from a Department of Homeland Security report from 2017 detailing how 3,775 people were stopped because their names matched those on a terrorist watch list. Moreover, they weren't even apprehended at the southern border, but at airports across the globe. To use those statistics, then, is not only purposefully misleading but outright dangerous, as more and more Republicans continue to demonize innocent immigrants.

But if any terrorists are truly being captured in airports, then Trump prolonging this shutdown is putting this country in grave danger, as it has only had the consequence of making our airports more vulnerable.

According to Hydrick Thomas, president of the national TSA employee union, there has been a deluge of TSA agents calling out from work, including a nearly 300% increase in no-shows at Dallas-Forth worth International Airport. It should go without saying, but if terrorists are being apprehended in airports, it might not be the best idea to withhold pay from TSA agents who protect those very airports.

But, of course, this shutdown is not about keeping people safe, it's about erecting a monument to Trump's ego and appeasing his far-right base—and that is clearly unacceptable.

We, the undersigned, demand that Sarah Huckabee Sanders retract her glaringly false statement about the southern border and stop distorting the truth to manipulate the American people.