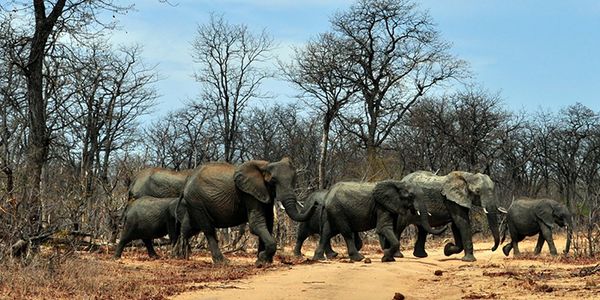 Severe drought is putting everything at stake. We must act now.

This is the worst drought in 40 years.

This drought is urgent. Over twenty-two million people are facing hunger in the Horn of Africa, and an estimated 205 elephants died over nine months in Kenya alone. As resources like water become scarcer, human-wildlife conflict will increase and threaten the health and safety of communities and ecosystems.

On patrols in Tsavo National Park, located in southeast Kenya, wildlife rangers found the carcasses of 10 baby elephants over two months – all victims of the drought. One of the largest national parks in the world, Tsavo is home to around 12,000 elephants – about a third of Kenya's elephant population. But that population is at risk.

We can't afford to wait until the next decade, next year, or even tomorrow. Climate change is here – today. And Africa's communities, wildlife, and wild lands are already paying the price.

In emergencies like this, it becomes clear how the well-being of people, wildlife, and protected areas are all connected. Can we count on you to be one of 50,000 advocates for a swift climate response that centers people and nature?

I commit to taking the following steps:

- African countries contribute only 4% of global carbon emissions, but climate emergencies are hitting them hardest. I will urge elected officials to act now to stabilize greenhouse emissions, limit global warming to 1.5°C, allocate funds to climate-proof African protected areas, and invest in sustainable development in Africa.
- I pledge my support for protected area conservation. People and nature are connected, so building climate resilience in Africa's ecosystems will climate-proof human well-being in turn.
- I will spread awareness about the growing impacts of climate inaction on Africa's people, wild lands, and wildlife by speaking with friends, attending protests, signing petitions, and sharing climate solutions online.
- While water is a local issue, we can fight climate change anywhere on Earth to prevent droughts. I will act directly as an individual, in my community, in my workplace, and wherever I can to reduce greenhouse emissions and build a sustainable future.

Pledge your support of AWF's critical conservation work now.
Sign Petition
SHAREShare With FriendsTWEETEMAILEMBED
Sign Petition
See more petitions:
You have JavaScript disabled. Without it, our site might not function properly.

Care2
Severe drought is putting everything at stake. We must act now.
SHARETWEET