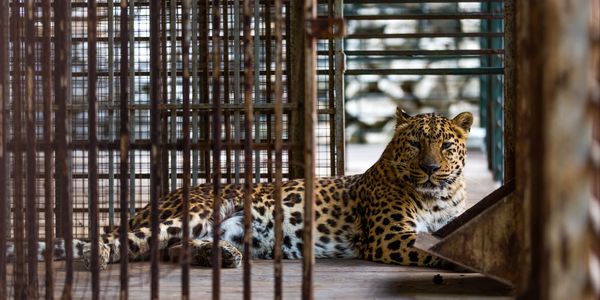 Big cats are not pets, and pretending they are is animal abuse. Yet estimates suggest that over 10,000 big cats are being kept as pets or in roadside zoos in the United States. That number is higher than the total number of tigers remaining in the wild!

Tigers, lions, and leopards have unique, demanding needs that simply cannot be met in households. These spectacular creatures require specific diets and natural habitats that allow them to hunt, play, and thrive. Yet time and time again big cats are found being kept illegally in inhumane and traumatizing conditions -- in people's houses, backyards, and sheds. These conditions can lead to a lifetime of psychological turmoil, and in worst cases, end up with another member of an endangered species dead.

Keeping big cats as pets is not only harmful to the animals, it can be extremely dangerous for humans, too. In May of 2021, a Bengal tiger being held illegally escaped, putting unsuspecting people at risk in a residential community in Texas. Big cats have the potential to do massive harm to local native species, and pose a large threat to our domestic pets, children, and neighbors.

While researchers and animal rights activists have been describing how dangerous and harmful big cat ownership can be for decades, Congress continues to drag their feet on action. Luckily, after several attempts, the Big Cat Safety Act was reintroduced in both the House and the Senate in September of 2021. But, we must ensure that the measure doesn't fizzle out and fail again.

Sign now if you agree that the Big Cat Safety Act is long overdue, and must be passed now to protect our brilliant lion and tiger friends!