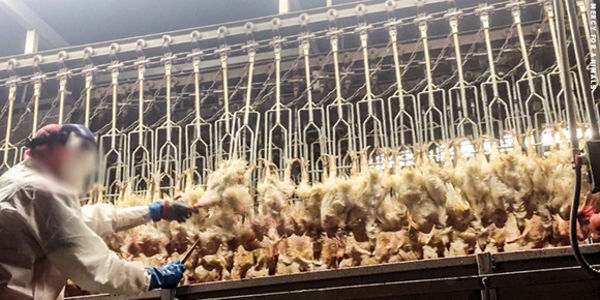 Protect Poultry From Suffering at Slaughter

Each year, 9 billion chickens and turkeys are slaughtered in the United States, yet there are no federal regulations to protect the animals from inhumane handling. The US Department of Agriculture does virtually nothing to ensure that the deaths of these birds are not filled with pain and suffering caused by faulty equipment, lack of worker training, and neglect—even when a slaughterhouse has a record of repeated poor treatment.

The USDA is aware of and documents many of these incidents, but it does nothing to stop them from reoccurring in the future. Instead, the USDA favors voluntary standards, which producers ignore or willfully violate. Hundreds of incidents affecting tens of thousands of birds are documented annually, many of which could be prevented by a regulatory system that requires birds to be handled humanely.

Many of the billions of chickens and turkeys slaughtered annually under the USDA's poultry inspection system endure avoidable pain because of the USDA's failure to regulate bird handling at slaughter. The department's reliance on voluntary standards for handling means that even repeated incidents of malfunctioning equipment, poor worker training, and neglect have no consequence. Many of these incidents result in birds dying by causes other than slaughter—rendering the carcasses "adulterated" under the law. It is the USDA's duty to promulgate regulations to require humane handling of birds, and end the systematic mistreatment of these animals.

Under the existing system, poultry slaughter establishments can continually engage in behaviors that cause immense suffering to birds and face no consequences. For example, a Jennie-O slaughter plant recently received 10 Memorandums of Interview (MOIs) within a 4-month period for severe injuries to turkeys, including large areas of torn skin, hemorrhaging, and muscle mutilation, all due to the same cause: malfunctioning equipment. The USDA did not require that Jennie-O correct the problem and the plant was not penalized for harming the birds. Even incidents of willful mishandling are not stopped by the USDA. At Southern Hens, a USDA inspector cited the plant on 10 occasions in less than one month because workers were tossing crates with live birds inside.

Poultry establishments also repeatedly engage in behavior resulting in the death of birds from causes linked to transport and holding area conditions. For instance, an incident at a Butterfield Foods Company chicken establishment resulted in 9,750 hens dead on arrival due to lack of protection from subzero temperatures (-8° to -17° F) during transport. Many of the dead birds were frozen to their cages. Establishments also hold over birds for extended periods prior to slaughter, sometimes for hours or days without providing access to food or water. For instance, a Butterball plant held a truck of turkeys for 31 hours before beginning to unload last January. The holdover was so long that many turkeys were dead on arrival and some had begun to cannibalize weaker birds.

These are just a few examples. Thousands of incidents have occurred at bird slaughter establishments nationwide since the USDA began monitoring bird handling in 2006. Unfortunately, the MOIs currently issued by inspectors do not motivate plants to change their behavior. Citations with no consequence or follow-up lack the impact of a regulatory violation.

I respectfully request that you take action to protect birds by promulgating regulations that require humane handling at slaughter. Thank you for your consideration.

Sincerely,
[Constituent Name]
Sign Petition
SHAREShare this petition with friends!TWEETEMAILEMBED
Sign Petition
See more petitions:
You have JavaScript disabled. Without it, our site might not function properly.