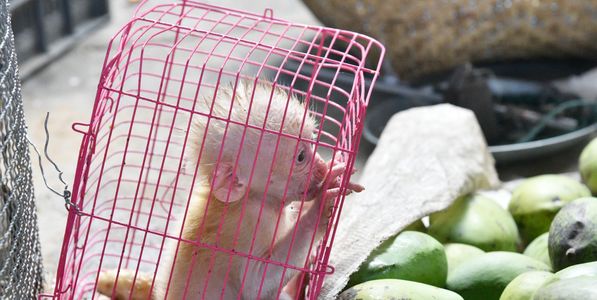 Our broken relationship with animals caused this pandemic, and scientists say it will definitely lead to another

In 2020, the world came face to face with the consequences of humankind's actions -- our relationship with nature and its animals brought a pandemic crashing down on our heads. Destroying wildlife habitat at breakneck speed while participating in the capture, breeding, trading, and consumption of wild and exotic animals has brought us dangerously close to the estimated 650,000 to 840,000 unidentified viruses that scientists say could be transmitted from wildlife to humans -- the coronavirus was one of them.

That's why it's so exciting that a bipartisan group of Senators and Congressional Representatives have introduced a bill to directly address this looming threat: the Preventing Future Pandemics Act. The name says it all.

Sign the petition and ask Congress, and then the Senate, to vote in favor of preventing future pandemics!

While a pandemic is inherently global in nature, a huge part of the onus of preventing one falls on the United States: it commands 20% of the global wildlife market, importing almost a quarter of a billion live animals per year. The country and its leadership is quick to judge others' participation in exotic animal markets, but is a huge driving force in the industry. The Preventing Future Pandemics Act "would prohibit the import, export, and interstate trade of live wildlife for the purpose of human consumption" in the U.S.

When live animals are transported, especially en mass and for the purpose of consumption, they suffer. Those handling them see them as prices per head, not living, feeling creatures -- after all, they're just going to die anyway, right? It's cruelty in one of its worst forms: tiny cages crammed full with innocent, terrified animals, most of them having been torn away from their homes and families; unsanitary conditions, with urine, feces, and blood pooling together. These conditions are not only heartbreaking -- they are petri dishes for disease.

But now humankind is paying the price for these horrific transgressions. May we use this as a moment to set things right! Better late than never.

The legislation would also allocate a total of 300 million dollars to international efforts to promote animal biodiversity, fight the illegal wildlife trade, and empower communities to deviate from dangerous food sources. The bill also notes that special considerations are to be made for indigenous communities that depend on wildlife as food sources -- an important distinction to make considering that indigenous peoples have lived off of the land and its animals for centuries in sustainable, compassionate ways.

Our current systems are broken. The way we farm, hunt, trade, and consume animals has only yielded suffering, disease, pain, and a huge amount of money for a select few while global hunger remains a huge problem. It's time for a change.

Sign the petition if you want animals and humans to prosper for centuries to come. Let's get Congress and the Senate to pass the Preventing Future Pandemics Act of 2021!

Care2
Our broken relationship with animals caused this pandemic, and scientists say it will definitely lead to another
SHARETWEET