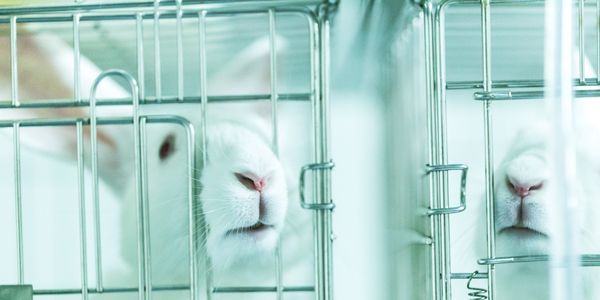 Louisiana Banned the Sale of Cosmetics Cruelly Tested on Animals! All Remaining States Must Do the Same!

For years, animal rights activists have been calling for the end of cosmetics testing on laboratory animals. Not only is the practice deeply cruel, causing unnecessary suffering to animals; through technological advances and a long list of already approved ingredients, this cruel practice has in recent years become totally unnecessary. By passing a ban on the sale of cosmetics that test on animals, Louisiana just showed that there is no excuse for companies to continue to subject animals to this abuse! All other states must pass similar bans on these products!

Tragically, a whopping 41 states and Washington, D.C. still allow the sale of cosmetics for which countless innocent animals were subjected to pain and suffering. Sign now to demand that they follow in Louisiana's footsteps and say no to animal testing on cosmetics!

During cosmetic testing, products and chemicals are forced into animals' eyes, down their throats, and slathered on their poor, tender skin. They are kept in bleak testing facilities where they may never see the sun, touch grass, or know true love and nurturing. Rabbits, guinea pigs, mice, and rats, to name a few, are restrained during these painful tests so they cannot move or get free – and they go through all of it without any pain relief.

The movement to protect animals from cosmetic testing is growing, and Louisiana is just the latest state to sign on. In 2018, California became the first U.S. to ban the sale of cosmetic products that were tested on animals, and Nevada and Illinois quickly followed suit the next year. Now the products are banned in 9 total U.S. states – a huge step in the right direction, but clearly not enough to protect all of our non-human friends from the harm and suffering of unnecessary testing. Globally, 40 countries restrict cosmetic testing on animals in some capacity. These states and nations are on the right side of history. Will the other US states join them?

Thanks to updated technology and the approval of alternative, safe ingredients, the practice is completely unnecessary. In fact, not long ago, a new screening process was approved that not only protects animals from the suffering of being tested, but is also cheaper and faster than animal testing. The best part? This screening process is just as effective as using animals, but without any of the abuse.

There are cheaper, faster alternatives that do not subject poor animals -- who should have the opportunity to live lives with autonomy and dignity -- to abusive cosmetic testing practices. Sign the petition now to tell the remaining 41 U.S. states that they can easily pass similar legislation as Louisiana! We must put pressure on our legislators to do the right thing, and reduce unnecessary animal suffering!

Care2
Louisiana Banned the Sale of Cosmetics Cruelly Tested on Animals! All Remaining States Must Do the Same!
SHARETWEET