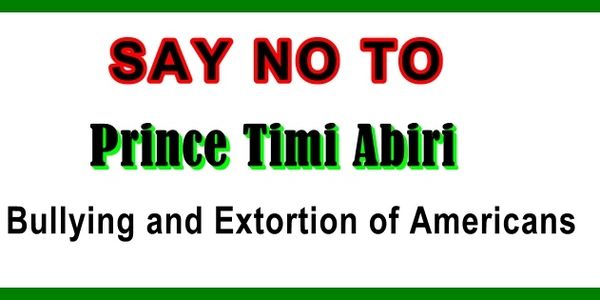 Say No to Prince Timi Abiri Extortion and Bullying

We demand a safe experience using social media platforms free of bullying and threats. Cyberbullying is real with real consequences. How would you feel if this was you or your team or loved ones?

Every person has a right to raise money for their projects online/offline. However, when a person says, "no" and the exchange follows with a threat, it becomes a crime of extortion.

This past week, I received several complaints from members of laExpose' which is an international charitable organization. As the Founder, I have a responsibility to the members. Members are complaining that they are being harassed and threatened. The perpetrator asks for money and if the member or their friends don’t give him, an “evil omen is spoken against them” by Prince Timmy Abiri (Timi, Timilehim) (Abiri Timilehim Stephen) of Reality Entertainment, Face of Osun & Int' Peace Conference. He slanders individuals and quick to launch hate campaigns. When confronted, he denies and go into a victim role and rudely accusatory and belligerent.

Last year, I was being humiliated and embarrassed by his smear campaign and ousted him from our platform, cutting off all communications and he's back.  I felt like a hostage giving and supporting his organization. The antagonistic threats and blackmailed followed. It is time out for being gullible due to friendship! Everyone is not lying how he abuses people over money.

As a Leader of a large team of people including a large fan base, it is time to say zero tolerance, "NO MORE". We have to stand united against all levels of brutality that is evident cyber bullying which is a crime.

People that prey on Americans being generous, the magnanimity will diminish due to skepticism & exploitation.

It is time for us to demand that Facebook and other social media platforms. including law agencies to take decisive action to remove reported criminal bullies.

The stats of suicide and cyberbullying is on the rise and we need to have the courage to do something, say something! Be a victor, not a victim, report all forms of abuse it just might save someone earnings and even a life.
I have notified Facebook and the Economic & Financial Crimes Commission in Nigeria and US Homeland Security to step in.