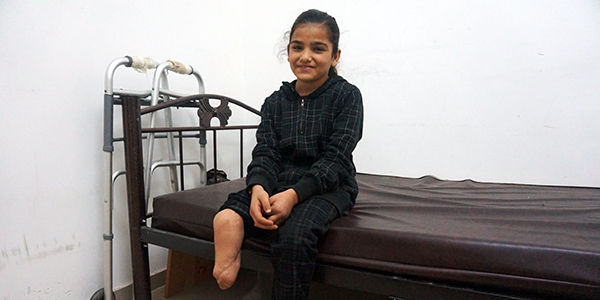 Maryam was shopping with her mum and grandma in the market. They were choosing vegetables to make something tasty for dinner, when there was a giant flash as bright as the sun. The ground wobbled with a frightening boom. Shards of metal shot through the air as fast as bullets.

Then there was silence.

And after that, what sounded like rain, as debris pattered all around, mingled with smoke and moans. Maryam didn't know it at the time, but her grandma was dead. Maryam couldn't feel her leg, and her mum was nowhere to be seen.

Maryam's right leg was mutilated and doctors had to amputate it to save her life. Her mum was also badly injured – her skull had been broken and her right eye destroyed by shrapnel.

Every year, tens of thousands of civilians, including children like Maryam, are killed and injured by the use of explosive weapons* in cities and towns. In Syria alone, more than 2 million children are at risk, living in fear of bombing attacks and unexploded weapons left behind like deadly buried treasure.

And yet, using explosive weapons in populated areas is against International Law. Urgent action is needed to protect children and families!

Demand justice for children like Maryam and her family. Sign the petition to Prime Minister David Cameron right now.

*Explosive weapons include mortars, rockets, missiles, artillery shells, and air-dropped bombs. They also include landmines and cluster munitions, both of which are banned by international treaties.

I call on the UK and all states worldwide to:

Sincerely,
[Your name here]
Sign Petition
SHAREShare this petition with friends!TWEETEMAILEMBED
Sign Petition
See more petitions:
You have JavaScript disabled. Without it, our site might not function properly.