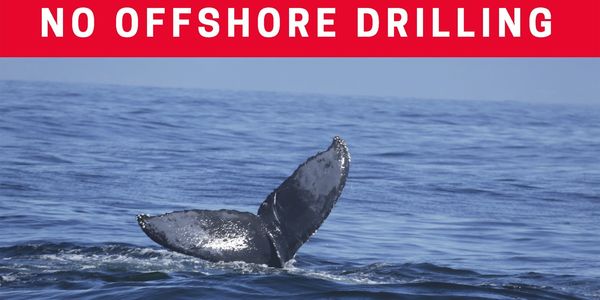 The Trump Administration released the draft proposed OCS Oil and Gas Leasing Program for 2019-2024, expanding offshore oil drilling to 90% of the nation's Outer Continental Shelf in January 2018. This proposal includes new offshore oil drilling in America's protected coastlines, as well as in marine monuments, sanctuaries, and marine reserves. In the plan, the Department of the Interior is proposing lease sales from Northern to Southern California beginning in 2020, as well as in Alaska and on the Atlantic Coast.

Concurrently, the National Oceanographic and Atmospheric Administration(NOAA) has received a mandate to review the status of all National Marine Sanctuaries, potentially removing protections and allowing increased offshore oil and commercial fishing. These national biological and cultural treasures are our Nation's legacy and critical for the long term health of marine ecosystems, our economy and our nation's heritage. The administration is targeting expanded areas such as the recently expanded Greater Farallones National Marine Sanctuary protecting over hundreds of thousand of seabirds and marine mammals feeding and breeding off California's Central California coast.

Seismic airguns behind ships release intense pulses of sound in the ocean. This ocean noise harms whales and other marine life that rely on their hearing for survival. Noise from vessels and small spill associated with testing and drilling begin the damage, but the risk of a large scale blowout or pipe rupture releasing millions of gallons of oil are the greatest risk ton our coastal ocean's ecology and economy.

The value of the oil removed from California offshore beds are not worth the damage extracting them will cause, and the potential impacts on California's 7 billion dollar commercial fishing,and ocean recreational and tourism economy.

The National Marine Sanctuaries are California's and our Nation's cultural and biological treasures. Supported by millions of American citizens, and developed with widespread State and Federal support to protect whales, seabirds, marine wildlife and ecosystems, the Channel Islands, Monterey Bay, Cordell Bank, and Greater Farallones National Marine Sanctuaries symbolize our natural legacy and protect some of the healthiest marine ecosystems in the world. Over forty years, under both parties, we have developed a national system that protects ocean resources while providing sustainable recreational and economic benefits to our citizens and visitors to the California coastline.

The presidential mandate to review our Sanctuaries protective status and offshore oil development places our California coastal protection at risk.

In 1969 the California coastline suffered the direct and destructive impact of an oil spill to our marine wildlife, coastal ecosystems and domestic fisheries. In the 1970s, overfishing threatened the balance of our coastal marine ecosystems and threatened marine mammal populations causing starvation and disease. Driven by overwhelming public support, Congress responded by establishing our National Marine Sanctuaries. The prevent a reoccurence, a ban on any new offshore oil exploration and extraction off our coastline soon followed, a ban that has been maintained for decades.

We urge the Bureau of Ocean Energy Management to carefully consider the voice of the public and the important economic benefits our coastal ocean and Sanctuaries provide, and continue to ban offshore oil development off our coast in the OCS Oil and Gas Leasing Program for 2019-2022.

Thank you for your kind consideration.