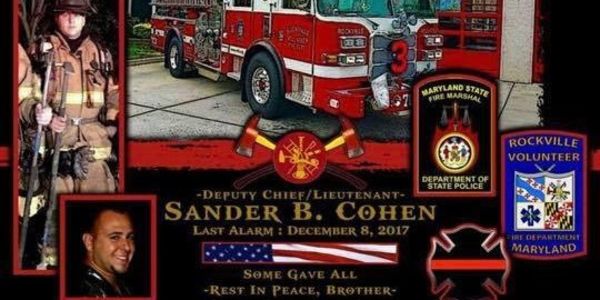 Name the City's newest park in honor of Sander Cohen

The City of Rockville is creating a new 6.5 acre park in the Chestnut Lodge neighborhood and reached out to residents for suggestions on the name of the new park. Among the suggestions were several to name the park in honor of recently deceased Deputy State Fire Chief and Captain of the Rockville Volunteer Fire Department, Sander Cohen. The suggestions were reviewed by Rockville Recreation and Parks Advisory Board and a recommendation was made by the Board to name the park, "Chestnut Lodge Park." The Board indicated that "a person must be deceased for at least one year prior to naming something in their honor." However in speaking to the Department of Parks and Recreation, it has been determined that the policy is a guideline only and that the Mayor and Council has final decision-making authority on the future park's name.

Sander Benjamin Cohen, born August 26, 1984 in Washington , DC., died at the age of 33 on December 8, 2017 in Rockville, MD. He heroically passed serving in the Line of Duty for the Maryland State Fire Marshal's Office. Sander Cohen was a nine year veteran of the Maryland State Fire Marshal's Office, where he held the rank of Deputy Chief. He served as the Regional Commander of the Northeast Regional Office.

Throughout his career, Sander received numerous awards including a Unit Citation from Prince George's County Fire & EMS Department for his involvement in a multi-agency investigation. In addition to his public service as a State Fire Marshal, Sander was a 14 year veteran of the Rockville Volunteer Fire Department, where he held the rank of Lieutenant, and was posthumously promoted to Captain. Sander was a dedicated and active member holding many positions including Shift Officer and Director. He was awarded a Citation of Bravery for his life saving actions at an apartment fire on December 22, 2003.

Sander Cohen, a longtime Rockville resident, exemplifies what it means to be a member of this community and we can think of no better way to honor his sacrifice than to name the newest City park in his memory.

The Mayor and Council are scheduled to take action on the recommendation at their May 7 meeting.