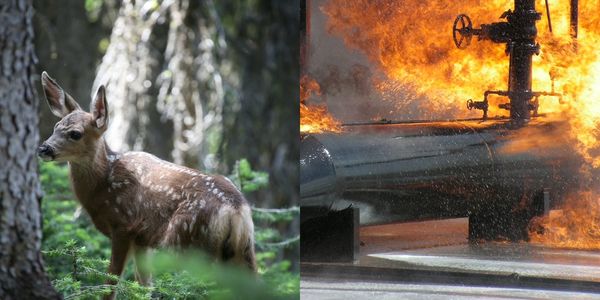 Coastal GasLink is currently constructing yet another massive, 416-mile pipeline, and the Royal Bank of Canada is funding it. The proposed pipeline will cut through Wet'suwet'en land without approval from hereditary chiefs, and just like all other pipelines, is nearly guaranteed to leak eventually. On top of that, the Arctic and Antarctic just reported temperatures seventy degrees above average because of global warming. But apparently -- as celebrity activist Mark Ruffalo pointed out -- the Royal Bank of Canada doesn't care about climate destruction or environmental justice.

Sign now to demand the Royal Bank of Canada stop financing the construction of this pipeline!

If you find yourself asking, "why are more pipelines being built in 2022?" we're wondering the same thing. Last year, a number of temperature records were shattered, and many species inched closer to extinction -- further proof that the climate crisis is out of control. In fact, the climate situation is so dire that the estimates suggest there could be over 200 million climate refugees by the middle of the century. So why is more infrastructure to extract and transport fossil fuels being constructed, and why is the Royal Bank of Canada funding it?

Maybe the Royal Bank of Canada thinks it can just ignore this evidence of the climate crisis, assuming people can't visualize the harm. But what's easier to visualize is the risk of a leak -- when natural gas escapes from a pipeline, it "can build into an explosive concentration," killing trees and vegetation, causing "explosions and fires," and releasing "greenhouse gases into the atmosphere."

Even worse is the fact that this pipeline is a textbook case of environmental injustice. The pipeline will run directly through Wet'suwet'en territory without the consent of tribal leaders. As indigenous activists around the world have pointed out, native people are fighting on the front lines of climate change, in part because corporations threaten their sovereignty so often with these absurd, unjust projects.

There is no reason we should be building more toxic fossil fuel infrastructure, and especially on indigenous lands. We must put pressure on the Royal Bank of Canada to demonstrate that they care about the sovereignty of native people and the future of the earth. No banks will even exist if the planet literally becomes uninhabitable. Sign now to tell the Royal Bank of Canada: divest from this gas pipeline project now!