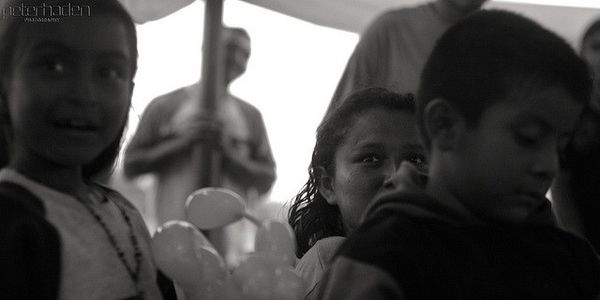 Focus on the Family (FOTF), is one of the most influential conservative Christian organizations in the United States. Gaining their backing has helped make or break politicians campaigns, and the issues they care about are almost always front and center on the party platform.

The organization whose motto is "helping families thrive" is not shy about speaking up when it comes to social issues that affect the sanctity of family. Yet, when it comes to one of the most pressing threats to families in the United States at the moment, the group has been relatively quiet.

If you scroll through their most recent tweets you will see posts of platitudes about the importance of fathers, the announcements on guest speakers for their upcoming broadcasts and if you look closely you will find their president, Jim Daly's "thoughts on the border crisis" that is currently destroying families as we speak.

Since May, more than 2,000 children have been snatched out of their parents' arms at the US-Mexico border. The government, under the watch of Homeland Defense Secretary Kirstjen Nielsen, has implemented a policy of family separation in which undocumented immigrants caught crossing the border are immediately charged with a crime and separated from their children. The children are then sent to cage-like detention centers where they could go days or weeks without seeing their parents.

Over the past few days, influential organizations have come out demanding an end to the practice including Apple, Facebook, the Mormon Church and Walmart among others have called for an end to the "inhumane practice" in their statements.

On the other hand, in FOTF's statement, Jim Daly admits "separating children from their parents can be harmful and traumatic" and that "seeing images of innocent, crying boys and girls in custody is enough to rip [his] heart out." But there is one thing he doesn't say — that he wants the Trump administration to stop separating children immediately.

Focus on the Family, an organization dedicated to "helping families thrive," is not doing anything to help those families being ripped apart at our Southern border.

Care2 thinks it is time for FOTF to really focus on what is happening to these families and use their powerful political voice to make it stop. Sign the petition and ask FOTF to join the call for the end of the Trump organization's zero-tolerance family separation policy.