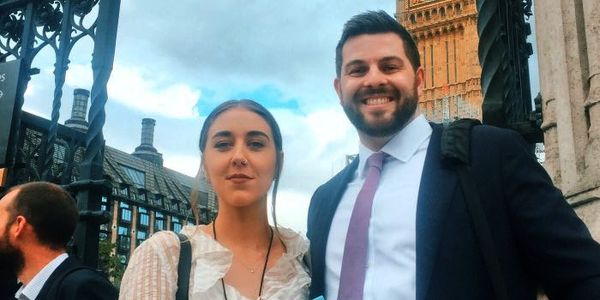 Care2 says: Upskirting is already illegal in public - so if you are a victim of upskirting you can report this to the police if you feel able to do so. The problem is that police often misunderstand the law because it is vague and unspecific, so they often let perpetrators go. The current law that can be used to prosecute upskirters, called "outraging public decency", does not reflect that upskirting involves a victim. This is why the law needs to change.

A bill will be debated in Parliament on 11 May 2018 which aims to make upskirting a sexual offence in England and Wales. Please sign now to email your MP urging them to back the bill - it could mean that we change the law together.

If you are in the UK, clicking 'sign now' will send an email plus your comments to your MP. Click 'read petition letter' to see the text of the email that will be sent.

I'm Gina Martin, the woman campaigning to make "upskirting" a specific crime (under the Sexual Offences Act 2003) in England and Wales.

This all started when two men took photos up my skirt (and sent them to people around me to humiliate me) at a festival last summer. After handing the phone, photo and one of the perpetrators over to the police, I was told that there was nothing that could be done.

One girl, who is just 13, told me that she was upskirted and brushed off by the authorities when it was reported. Another, a teacher, has told me how she dreads going to work because she was upskirted by a pupil in her class who she has been ordered to continue teaching. And a third, a young woman who was on the tube, has told me how she remains feeling humiliated and vulnerable following her upskirting experience.

Upskirting is a gross invasion of dignity that continues to affect the women it happens to long after the incident. The current law is inadequate as it fails to categorise the offence as sexual, rather than a public order offence. We want the Government to change the law so that upskirters can be properly dealt with in all circumstances.

I'm writing as your constituent to implore you to vote in favour of the upcoming bill to allow upskirt creepshots to be prosecuted appropriately, after hearing about Gina Martin's campaign for reform, supported by Care2. Ms Wera Hobhouse MP is introducing a bill, "Voyeurism (Offences)" in the House of Commons, to have its second reading on 11 May 2018, and which has cross-party support: https://services.parliament.uk/bills/2017-19/voyeurismoffences.html Please respond to let me know if you will be voting to support this bill.

There is a well recognised gap in the law of England and Wales that means that upskirters cannot always be prosecuted (i.e. some upskirters commit no crime because of the circumstances in which they commit the offence). The law as it stands also means that upskirters cannot be prosecuted for a sexual offence, instead typically – and preposterously - being prosecuted only for outraging public decency. The effect of this is not academic. It means that offenders are not dealt with appropriately and that, where prosecution is possible, there is no recognition that this odious act is a crime with a victim. These points are not unimportant. The law needs to be reformed. It is the only way to ensure that the relevant authorities can appropriately prosecute offenders.

In 2018, a time of change and zero tolerance towards sexual assault and violence, you have the opportunity to act now to ensure that the people of England and Wales are protected (as they are in Scotland). Please support this. Please do the right thing. Please make the time to voice your endorsement of Gina's bill.

[Your name]
[Your email address]
[Your postal address]