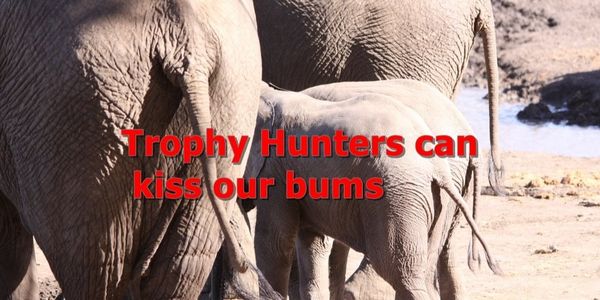 Year after year, about 600 lions, 800 leopards and 900 elephants are falling prey to hobby hunters. Here, the most beautiful and strongest animals are especially popular as a trophy, making the hunt for the already endangered species from poaching even more murderous. Precisely these animals are most important for conservation.

Hunting providers claim the alleged sustainability of trophy hunting, the cash receipts for awarding shooting licenses would benefit the protection of species and the local people. Numerous scientific studies in recent years refute exactly that. The local communities in these countries get practically nothing from what the hunters pay in the hunting countries Benin, Burkina Faso, Central African Republic, Namibia, Tanzania and Zambia. On average, each inhabitant can hope to receive just 30 cents per year. Wildlife conservation benefits even less in those corruption-plagued hunting countries.

Countries such as Namibia and Tanzania lure hunting tourists in hope of foreign exchange. But alone in Tanzania the strategy of sustainable hunting failed completely. In the biggest hunting ground in Africa, the Selous Game Reserve and surrounding areas, poachers slaughtered 57,000 elephants in the past five years. For amateur hunters there is now nothing to shoot anymore. However, in 1977 Kenya prohibited hunting and Botswana in 2014, for good reasons. Economic studies have shown that photo tourism creates far more permanent jobs than hunting tourism and is much more lucrative. For example, an elephant contributes to the GDP into EUR converted 1.5 million, based on its entire live span of 70 years.

Trophy hunting is devastating African wildlife and corrupting people and policies in Africa. It is a process whereby the public's wildlife heritage is transferred out of the public domain into the hands of hunters for cruel profiteering.

Study after study documents programs in which data on population declines are ignored, quotas go unenforced, illegal specimens are laundered through registered programs, and the promised benefits for local communities and conservation efforts never materialize.

In conclusion trophy hunting is NOT a sustainable conservation tool, it does NOT generates significant income for conservation. Compassionate solutions to conservation challenges, which encourage the development of sustainable and non-consumptive opportunities to generate income from wildlife while implicitly respecting and protecting the inherent value of individual wild animals and the natural world.