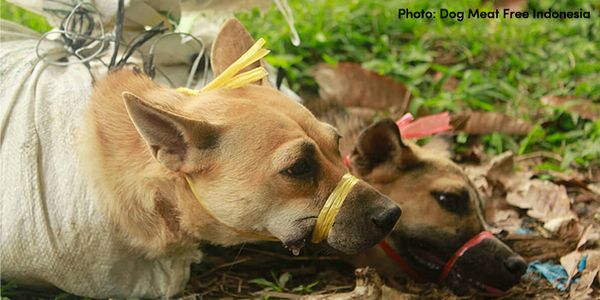 Join us in our calls for a dog meat free Indonesia

Take action now by signing our global petition calling on the Indonesian government to ban the trade in and slaughtering of dogs, and consumption of dog meat throughout Indonesia.

We are committed to ending the dog meat trade in Indonesia in recognition of the inherent cruelty to animals and the threat it poses to public health and safety.

Every year, millions of dogs are brutally transported throughout Indonesia to supply the demand for dog meat.

Many are stolen family pets and illegally trafficked dogs. They are crammed into cages and sacks so tightly that they can barely move, their mouths bound shut so they can hardly breathe. They are taken on long journeys to supply markets, slaughterhouses and restaurants. They watch others being brutally killed in filthy slaughterhouses whilst they wait their turn.

Sign now to urge the President of Indonesia, on behalf of all dogs and the vast majority (93%) of the Indonesian population who never consumes dog meat, to take action to safeguard Indonesia's dogs from cruelty and the nation's health by ending the cruel and illegal dog meat trade.

I am deeply concerned about the millions of dogs caught up in Indonesia's brutal dog meat trade, and the risk this poses to Indonesia's pledge to eliminate rabies by 2020.

Every year, millions of dogs – including many stolen pets - are transported within Indonesia to supply markets, slaughterhouses and restaurants. Nationwide investigations have revealed the immense suffering caused to these dogs – crude and brutal methods of capture, transport and slaughter – and there are also growing concerns for the risks the dog meat trade poses to human health, including the transmission of deadly rabies.

Despite only a minority of Indonesians ever consuming dog meat, the trade in dogs for consumption threatens the health of the entire nation. The dog meat trade is the only trade known to encourage the large-scale, illegal movement of dogs of unknown disease and vaccination status between regencies (and islands), disrupting herd immunity to rabies achieved through mass vaccination programs. For these reasons, the World Health Organization (WHO) has explicitly highlighted the trade in dogs for human consumption as a contributing factor to the spread of rabies in Indonesia. In fact the dog meat trade likely poses the greatest hurdle to Indonesia achieving rabies-free status by 2020.

Pet ownership is rising rapidly in Indonesia and with that comes a responsibility to provide adequate legislation to protect animals from cruelty. Around the world, dogs loyally assist us as therapists in hospitals and schools and serve with our armed forces and police to protect us. The dog meat trade is the ultimate betrayal of this special relationship.

Across Asia there is mounting opposition towards this cruel trade and an ever-growing number of countries and territories prohibiting the trade in and consumption of dog meat, on the grounds of human health risks, animal protection, and dogs' special roles as companion animals. Action to protect all dogs from this inherently cruel industry would be applauded and celebrated nationally and globally.

I urge you, on behalf of all dogs and the vast majority (93%) of the Indonesian population who never consumes dog meat, to please take action to safeguard Indonesia's dogs from cruelty and the nation's health by ending the cruel and illegal dog meat trade.
Sign Petition
SHAREShare With FriendsTWEETEMAILEMBED
Sign Petition
See more petitions:
You have JavaScript disabled. Without it, our site might not function properly.